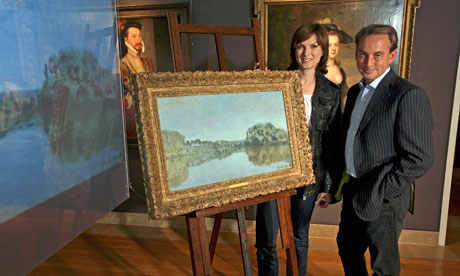 There’s no point in dwelling on the events that led to me watching a programme about art forgeries with Fiona Bruce on Sunday evening. I have nothing against the woman (indeed, her ability to argue convincingly in French during the show impressed me greatly) it’s just that she doesn’t turn up too frequently on Surf Patrol, the Rachel Zoe Project or whatever other item of soul destroying mind bilge happens to be showing on UK TV Crapola, which my TV automatically switches itself to at the weekend.

I am helpless in the face of enforced remote control removal.

‘Fake Or Fortune’ is essentially a vehicle for uber art dealer Philip Mould to demonstrate his not inconsiderable talents in solving the ‘mysteries behind paintings’. Fiona is along to decipher the scientific, complicated bits, generally by asking stupid questions of the experts on our behalf. This is comforting if, like me, you couldn’t confidently differentiate between a fake Monet and a daffodil.

In this episode, Philip and Fiona set about the task of trying to prove that pensioner David Joel’s ‘Bord de la Seine à Argenteuil’ is indeed by the impressionist and not a forgery. Joel has spent eighteen years doing just that, and judging by his patient wife’s long suffering expression, it hasn’t been a fun ride.

The problem is, only one organisation can decide whether a painting is actually a Monet or not. The dastardly Wildenstein Institute rejected Joel’s painting several years ago and have refused to budge on their decision ever since. Until it gets an entry in their catalogue, it’s not a Monet. Our heroes set about finding proof to back up their claim and after a great deal of mucking about with labels, canvases, expensive machinery and other people’s diaries for a good half an hour, a watertight case is assembled. They repair to the Institute’s HQ in Paris to deliver the painting and await the good news.

So, the story is all set up for the debonair art dealer and his trusty sidekick Fruce to unexpectedly drop in to the pensioners’ home and give them the good news. Except they can’t. In the face of what appears to be incontrovertible proof (the label, damn you, the label!) the Wildenstein Institute rejects the painting again. If it wasn’t bad enough that David Joel is eighty-two years old and keen to sell said painting to ensure his family are provided for, he actually thinks they’re joking when the news is broken, even looking around in a confused manner as though he expects Noel Edmonds to be hiding behind the sofa. Sigh.

Despite this unnecessary trauma on an otherwise peaceful Sunday evening, ‘Fake Or Fortune’ actually looks like it’s got the balance between science and entertainment spot on. Fruce gets a little over-excited in places, but Philip Mould’s obvious fascination with the subject matter is infectious and even if your interest in painting runs only as far as rejuvenating the bathroom in ‘something cheerful’, you’ll find yourself intrigued by the methods of enquiry employed by the programme.

I might go as far as recording ‘Surf Patrol’ next Sunday.