Liv isn’t an action hero. She works in a bank, hangs out with her friend Nick and has turned off all the social notifications on her InVision headset because they make her anxious. When a car accident leaves her disoriented, she assumes nightly visits from a tech nerd and a starched nurse in strange hat are vestiges of her trauma that will eventually pass. Until the nurse tells Liv she’s the least competent but most available person to avert a crime that could damage humanity irreparably.

Falling over all the time is the least of it.

Pre-order ‘If I Were You’ now by clicking this link.

What space does Sir Lenny Henry occupy in your hearts? Honestly.

Assume the correct answer is “Whew, Lenny Henry.” *shakes head, mops brow*. “Lenny was the bold champion of black comics when Great Britain had none. Revered as the man who hacked his own path through the undergrowth of working men’s clubs of the seventies and eighties to mainstream television and beyond, Sir Lenny now occupies that most coveted of roles in public life: National Treasure. We’re very proud.”

That’s what it looks like. Nice, isn’t it? Everyone comes out of it looking like a thoroughly good chap and Sir Lenny Henry receives his due for a career spanning some forty years and counting.

There’s a touch of revisionism going on here, isn’t there? Not with personal comedy preferences – for the purposes of this conversation, they’re not relevant – but with our cultural history and our almost pathological insistence on rewriting history to make ourselves feel better.

I knew you’d understand. You can move away now.

The fact remains, I probably wouldn’t have bothered listening to an interview with Lenny Henry if Amanda Palmer (white, cis, female, author, musician) hadn’t chosen to speak to him on her pod, The Art of Asking Everything. I’m not proud of it, but if I’m going to lightly admonish English culture for being fucking awful, it’s reasonable I take my share of the blame.

I love comedy, just not ‘that’ kind of comedy. As I was growing up and developing my taste, I was attracted to alternative performers, although at the time I couldn’t have defined that for you. I just knew that Rik Mayall’s love affair with Cliff Richard and Neil the hippie sneezing into a binbag made me laugh so much I hurt. Lenny’s output, in comparison, felt a little tame.

Even as I was pressing play, I wondered what the host might have to say to this man, and what could possibly be interesting about it. Last week’s episode, ‘Bullshit Is Everywhere’ with author Elizabeth Lesser, demonstrated Palmer’s skilful and sensitive technique as an interviewer – a surprise from a performer so expressive and dynamic – and my curiosity was piqued.

Only a white child growing up in England could believe that having your own sitcom on national television at twenty-four years old was dangerous. That’s not to say that Mayall, Edmondson, Planer and Elton don’t deserve the plaudits they’ve received over the years, far from it, but having listened to Lenny discuss performing comedy to a crowd of mildly inebriated and unapologetically racist blokes in what’s essentially a glorified outhouse, I feel I now have a better grasp of the term ‘dangerous’.

If you’re not paying attention, it’s easy to miss the clues. Despite heavy indications to the contrary, I don’t believe the majority of us on this septic isle are racist. I still believe in that now beleaguered cliche that we’re a friendly, hospitable bunch who will inevitably be let down by some twats who like to shout.

But dwelling between these comfy binaries is the truly British trait of ‘ooh, that makes me mildly uncomfortable, let’s never speak of it again’. Lenny Henry lives here too. A man who, for many years, was one of very few black faces regularly appearing on television. Who had little choice but to force himself into a box that didn’t fit him so he could stay there, all the while watching fellow comedians (and I use that term loosely) like Jim Davidson perpetuate unpleasant stereotypes and get rewarded with more screen time.

Henry was still there though, wasn’t he? As an advocate of representation, I understand the importance of seeing others like yourself in powerful positions, so surely that’s enough? The man’s got a knighthood, right?

Via this conversation, I learned more about Lenny’s early life and career than I ever picked up from watching him on TV. He discussed his memoir, ‘Who Am I, Again?’ and the necessity to tell his story in its entirety, rather than the sanitised version which TV execs and viewers preferred. The one that won’t frighten an audience only capable of coping with black people who don’t make a big deal of being black. Even better if they play along with the tropes. Henry himself did this for five years as a member of a touring stage version of ‘The Black & White Minstrel Show’; a source of shame that he himself should not be forced to bear.

Even Ricky Gervais, a man who should know better (an article in its own right), riffed gently on Henry’s position in English popular culture as recently as 2006.

I’d expect a guy as smart as Ricky to have figured out the reason Lenny might be perceived as ‘unfunny’ in some quarters is quite simply that he’s built a very successful comedy career despite being unable to tap into his own personal history. I can’t think of a single creative type who wouldn’t have a nervous breakdown upon reading that statement, including myself.

Please listen to it. Especially if you grew up in the UK in the seventies and eighties. In 2020, as the Black Lives Matter movement wavers between catching fire and burning out, it’s our job to ensure the former happens and we do this by listening. Don’t assume you already know or you have nothing more to learn. The world can look completely different if you take a second to move slightly and change your perspective.

It’s more important now than it’s ever been.

Amanda Palmer’s podcast, The Art of Asking Everything, is available in all the usual places.

French actress Adele Haenel walked out of the Cesar Awards last weekend when Roman Polanski was awarded ‘Best Director’ for his movie J’Accuse (An Officer and a Spy). Footage of her exit, including her gloriously continental expostulations, was posted to Twitter and went viral.

END_OF_DOCUMENT_TOKEN_TO_BE_REPLACED

Thirty-six hours before a ball is kicked, the narrative is taking shape. In the vernacular of the British tabloid press, England’s plucky Lionesses are now pitted in an ideological battle against the arrogant US Women’s National Team (USWNT). Not for goals, victories or honours, although one can assume that a game of football will break out at some point, but for the title of most dignified.

Megan Rapinoe won’t be winning that. She and her trophy hoovering cohorts’ behaviour on and off the pitch have been endlessly scrutinised and critiqued since this latest incarnation emerged onto the world stage, consistently failing to impress despite winning a World Cup, Olympic Gold, two CONCACAF Gold Cups and two SheBelieves Cups. They’re arrogant, apparently.

Never a good look on a lady.

END_OF_DOCUMENT_TOKEN_TO_BE_REPLACED

Was this what Sepp Blatter was thinking about when he suggested that women’s soccer could be improved by the players wearing tighter shorts?

END_OF_DOCUMENT_TOKEN_TO_BE_REPLACED

Yesterday a man in a flat cap and an ill fitting shirt ran onto a football pitch and attempted to punch another man in the face. The puncher was a twenty-seven year old Birmingham City fan. The punchee was Aston Villa captain Jack Grealish.

END_OF_DOCUMENT_TOKEN_TO_BE_REPLACED 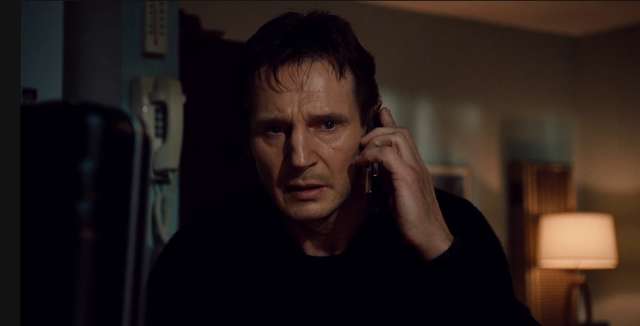 An interview emerged yesterday in which Liam Neeson stated to the Independent that he had sought to avenge the rape of a close friend by hanging around in London hoping that “a ‘black bastard’ would come out of a pub and have a go at me about something, you know? So that I could kill him.”

A shocking, repugnant admission immediately condemned as such by Neeson in the same interview. Still too late though.

END_OF_DOCUMENT_TOKEN_TO_BE_REPLACED 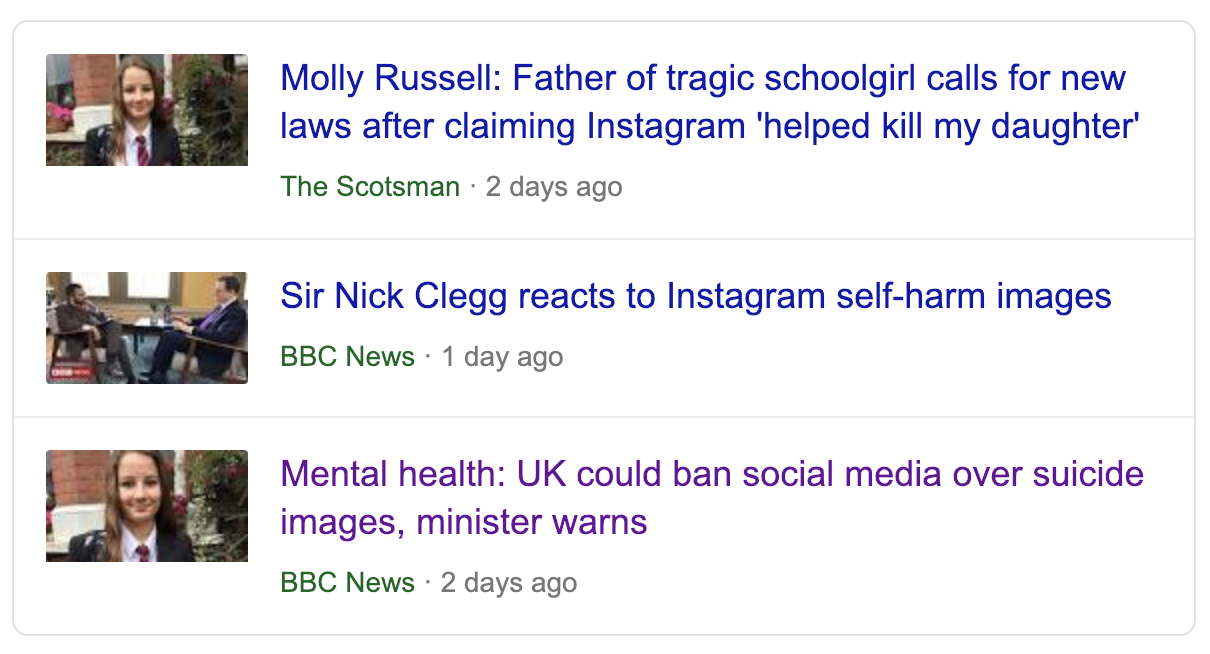 It’s been twenty years since I pressed a piece of broken glass into my forearm and drew a line. Watched blood flooding the wound, temporarily obscuring the puckered white flesh beneath. Felt dopamine flood my mind, soothing the frayed edges of my nervous system, the perfect agony driven into abeyance for long enough to make it seem worthwhile.

Unfortunately, the reflexive recoil that self-harming prompts – and that you may well have felt while reading those words – is one of many reasons why we do it. There’s no language to effectively convey the inescapable roaring in my ears back then. No words to describe the excessive energy coursing through my veins like an orchestral surge. The only way to get it out – let it out – is to cut a hole and feel it leave. The blood and the gore, the shock and the awe. The inside turned outward for the world to see.

Please. Look at my pain.

END_OF_DOCUMENT_TOKEN_TO_BE_REPLACED

Some books are bad. Not in a Mein Kampf sort of way, although there’s plenty of that about. In this case I mean the ‘if my parents catch me reading this trash, some non-specific unholiness will envelope my family and I’ll be ostracised from the community’ way.

In my early teens, these books were generally located on my Gran’s bookshelf.

END_OF_DOCUMENT_TOKEN_TO_BE_REPLACED

No one cared about Incels when they were just writing shit on the internet. We all care about Incels now because a man called Alek Minassian committed an atrocity in Toronto, someone looked at his internet history (which is basically the first thing journalists and writers do while normal people are still in shock) and found a Facebook shoutout referencing Elliot Rodger.

The net effect of this is to make us feel incredible anger towards a group of people that claims it only exists because ‘normal’ society has already excluded them.

For reference, Incel is a term reportedly coined by an individual called Alana “as a name for an online support forum for singles, basically a lonely hearts club”.