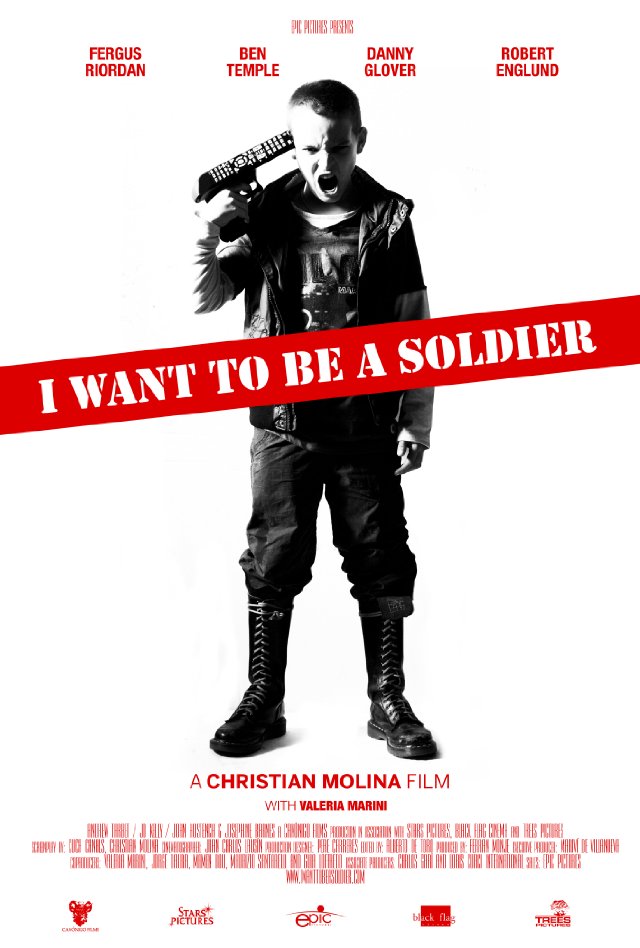 Crime specialists maintain that their job is made appreciably harder by the number of police procedurals on TV that are essentially ‘how-to’ guides for budding villains. Despite this, plus an advertising industry with a global spend of approximately $503 billion per year, a persistent school of thought still insists that violent & sexualised games, films, TV and adverts do not cause psychological problems.

‘I Want To Be A Soldier’ is Spanish director Christian Molina’s sharp intake of breath on the issue. His protagonist is Alex, an ten-year-old industry-standard good boy whose sweetly narcissistic idyll is ruined by the birth of his twin siblings. Alex is a smart boy and quickly spots an opportunity to exploit his parents guilt over their devotion to the newborns. Mere moments later he is taking delivery of a new TV set for his room and availing himself of as much brutal savagery, war crime and exploitation as a goggle box can reasonably be expected to pour out in a twenty-four hour period.

So far, so formulaic. But it’s worth hanging on in there as the plot develops. Alex’s progress down the now well signposted path to violent psychopathy is described by the presence of his invisible friend, Captain Harry; the inspiration behind the kid’s dream to become an astronaut. In the past, Captain Harry has helped Alex interpret the frequently confusing adult world. As Alex learns about the true nature of humanity, Harry morphs into the war ravaged, route march hardened Sergeant John Cluster. Alex begins to embrace a new career plan – the soldier of the title.

It’s within the confines of these relationships that the heart of the film truly lies. The world is a simplistic place when seen through the eyes of a child, and indeed through the kind, but naive presence of Captain Harry. When Cluster is in the house, it’s easy to feel the thrill of the violence and fear the unknown brings. It’s a far less predictable and safe world than the one Alex is used to but with Cluster by his side, he’s capable of anything.

The ending is predictable, but necessary. How could there be any other outcome than the one Molina has been driving at throughout the whole film? But it’s still shocking, brutal and upsetting. And honestly? It would be pointless to drape the film in useless subplots, ploys and twists when only a kid understands how he or she interprets information, and no-one knows how the knowledge gained from that process will manifest itself.

Christian Molina has stated an obvious truth with this film – one we seem stubbornly unwilling to even allow into our living room. There’s no room for informed debate when you have a TV, it seems.