Does female nudity necessarily mean a film is exploitative? It’s a relatively easy conceit to slip into, given the amount of female flesh included in many mainstream films for no apparent reason other than to titillate the audience, but ‘The Disappearance of Alice Creed’, director J Blakeson’s debut feature, refreshingly demonstrates that this doesn’t always have to be the case.

Vic and Martin are two nondescript but purposeful blokes silently preparing for what appears to be a major event. Visits to the DIY store and the supermarket, a non-descript van, the tearing down of curtains and hammering of boards over windows in an empty flat, unrollings of soundproof material and fixing of DefCon 1 levels of security on doors offer even the slowest of up-takers that something dodgy is afoot. 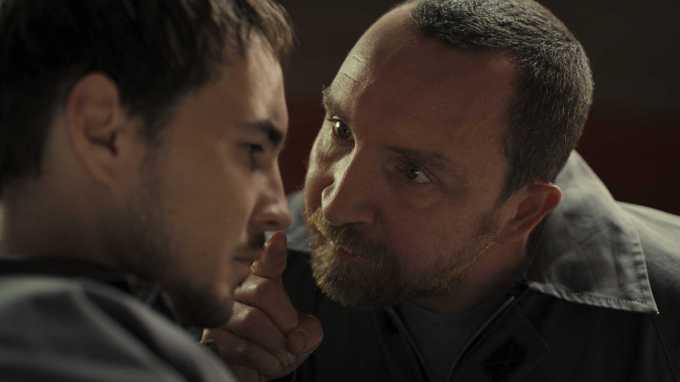 Eat your microwaved lasagne or I’ll poke your eyes out with my own death stare.

Information is released on a strictly need to know basis here, and this is as true for the characters as it is for the viewer. We are drip fed details about them, their motivations and their feelings as though every single plot development took a painful bite out of what was already a microscopic budget. As the narrative develops, the power balance, already precarious, snaps back and forth between characters, but each plot twist, while shocking,  is rendered completely convincing through the cast’s performances.

Both Vic and Danny have their reasons for involving themselves in the kidnap of the eponymous Alice Creed, and given the claustrophobic environment and tight parameters in which they are forced to work, Eddie Marsan and Martin Compston convey and invite genuine empathy – a very tough ask given we’re supposed to hate them.

Gemma Arterton is less convincing. Opportunities for emoting are admittedly limited for her as she spends 90% of the film tied to a bed and gagged, but when she is temporarily able to speak and move, it feels a little am-dram compared to the restraint shown by Marsan and Compston, and in turn, the director.

Nowhere is this restraint more evident than the nude scenes.  Shortly after being taken, Alice is tied to the bed in the soundproofed room, stripped and then re-dressed in trackies. The director shows his cast no sympathy, each movement and motion closely monitored by the camera, but at no point is there any sense that the kidnappers are involved in anything more than a perfunctory duty, anything more titillating than nailing a door shut or buying ready meals to sustain them through ransom drop negotiations.

Even better, once you’ve seen the story unfold in full, you’ll realise that their disinterest is meaningful and relevant in more ways than you can possibly imagine.

Unless of course, you’re one of those douchey people who only watches films to see the naked chicks. You probably got here by googling “gemma arterton naked” anyway, so if you read this article in full, fair play.

There’s hope for you yet.