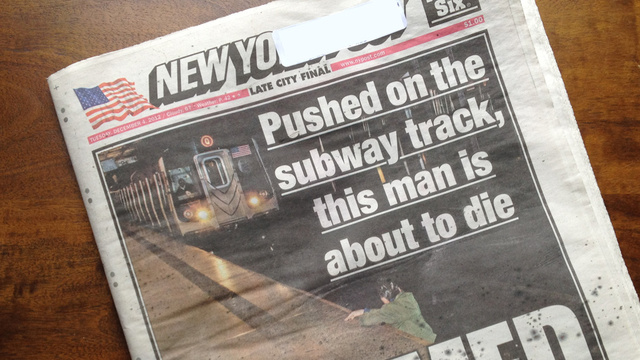 If you don’t have an opinion on the New York Post’s decision to run this image of Ki Suk Han on their front page last Tuesday, you almost certainly have something to say about R. Umar Abbasi’s decision to take it in the first place.

Han was struck and killed by the subway car after being thrown onto the tracks by Naeem Davis, who has subsequently been charged with his murder. Abbasi, a freelance photographer for the Post, has responded to claims he should have helped by stating he was too far away from the incident to get there in time, and was using his flash to try and alert the driver of the oncoming train.

The myriad responsibilities of photo journalists in life or death situations is not a new area of public debate. Indeed, heated discussions about an individual’s conduct in the heat of the moment are virtually a reflex response to an event of  significance being captured on film. From Kevin Carter’s Pulitzer winning picture of the vulture stalking a starving Sudanese child to the shots of people throwing themselves to their deaths from the World Trade Center, everyone has an opinion, generally rooted in what they believe they would do, given the exact same circumstances and a camera.

What we don’t appear to realise is that our armchair judgments of other people’s actions under a very specific set of circumstances we cannot even begin to fathom is worth jack shit. In fact, the tsunami of self-righteous indignation that forms in the wake of  our desperation to say what we think can and almost certainly does end up causing more pain and heartache for the family and friends of the victim than the photo itself.

Until we’re on that platform, near that burning building, staring at that starving child, we have no idea how we would behave, and no right to assume we would have done ‘better’. If only we realised that our critiques are simply symptoms of the guilt and hopelessness we feel as a result of the increasing disconnect between our lives and the pointless and casual cruelties inflicted by an uncaring world every day.

Then we might be able to convert all that energy we waste on forming our worthless opinions into empathy for the victims of these hideous tragedies, and perhaps find positive ways to prevent them from happening again in the future.