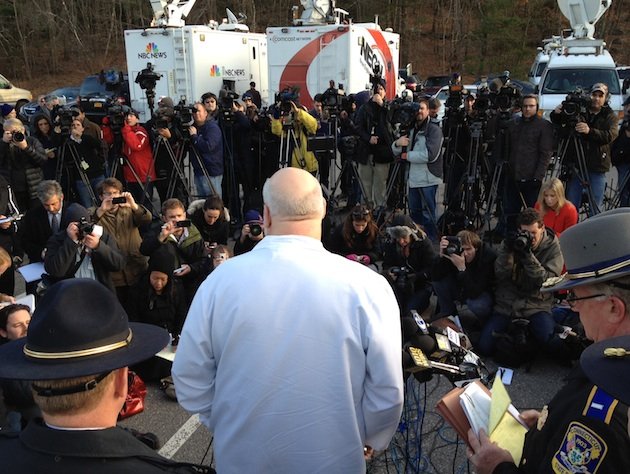 I’m not talking politically, I’m not talking about the result of the November sixth election;  I am saying that something has gone wrong in America and that we have turned our back on God.

I mean, millions of people have decided that God doesn’t exist, or he’s irrelevant to me and we have killed fifty-four million babies and the institution of marriage is right on the verge of a complete redefinition.  Believe me, that is going to have consequences too.

It’s human nature to try and seek explanation for events we cannot possibly understand. From the moment the news vans pulled up outside Sandy Hook Elementary school on Friday morning, desperation driven in part by horror, in part by the news networks desire to be the first to the details, prompted all manner of misinformation to be broadcast.

The Daily Mail reported there were two killers on the loose in the school. CNN claimed the killer was Ryan Lanza. Or Ryan Lanza was dead.

Not pleasant for anyone involved, but their actions are apparently the acceptable consequences for our insatiable demand for information. What vicarious understanding we can hope to gain from watching a journalist shove a microphone under a father’s nose as he makes his way home from the school with his son, and asking him how he felt the moment he heard that there had been a shooting, I’m not clear. But I’m sure in network terms this was a coup, as was the interview with the child who had been in the building, which they ran hour or so later.

The release of the facts put paid to this new, exciting strain of gonzo journalism, but you shouldn’t fear for those febrile, creative media minds. They had moved on to greater things, like trying to work out what prompted Adam Lanza to kill his mother, then drive to the school and shoot 20 children and six adults.

He had Aspergers Syndrome. He was a goth. His mother was a doomsday prepper. He didn’t have a Facebook page.

Given that all this unconscionable shite is now acceptable practice for news agencies, the likes of James Dobson seeking to promote their organisations by attaching themselves to the story should hardly come as a shock. The coverage he is receiving for claiming that the shooting happened as a result of the nation “turning their back on God” by allowing abortion and gay marriage is considerable and there is no doubt that his organisation will gain massive exposure. Just as the Westboro Baptist Church has for claiming they intend to picket the funerals of the victims.

Is it really that different to the news agencies jostling for position in front of a school where the bodies of murdered children lie? Where do we draw the line? The messages they are conveying are different, but all are seeking to improve their position by exploiting a horrifying situation.

That’s 20 young kids, as well as six teachers who died trying to protect them and all the families, friends and community members whose lives are irrevocably changed by what happened that day. In case we forget.