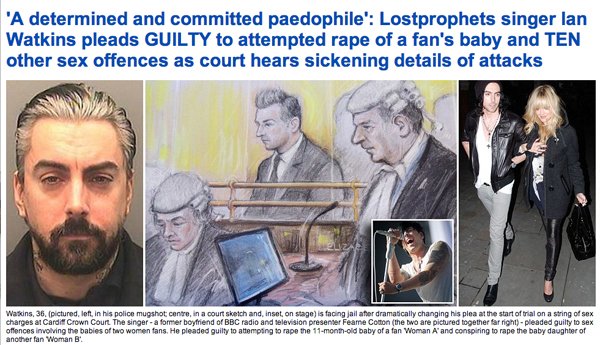 If you had asked me in 2000, I doubt I would have gone so far as to call myself a fan of Lostprophets.

Their brand of pop metal, performed by photogenic, heavily modded and moulded boys, leaned a little too close to the accessible mainstream than I was comfortable with at the time, but thefakesoundofprogress was a decent enough album and Shinobi vs. Dragon Ninja still pops up on the odd playlist from time to time.

I don’t think I’m in the majority.

The trouble with attaining fame within a specific demographic is that while your every day life tends to be of little interest to the media, it offers a degree of legitimacy to intense scrutiny and the means to obtain information that may not otherwise be available. Ian Watkins’ arrest on suspicion of child sex offences last year was a great example. He was famous enough to have moved in celebrity circles but not enough to be recognisable to the average consumer.

Which is presumably why the tabloid press has taken it upon themselves to contextualise Ian Watkins for it’s readers. Since the allegations were made public, the Daily Mail has used photographs of the singer with TV presenter Fearne Cotton, a woman he briefly dated in 2005.

When the story broke in December 2012, the newspaper ran a story suggesting that Cotton was seeking comfort by having lunch with a friend, while a lead article detailing Watkin’s offences and change of plea yesterday included a montage of photos including one of Watkins arm-in-arm with Cotton (top).

This morning, a follow-up article used the same picture (left), beneath a headline claiming that fans had been aware of Watkin’s predilections for years, but no one had listened to them.

The Daily Mail is by no means the only outlet to use Cotton’s name, but one of very few to use these images, and probably the only one to make them an integral part of their coverage.

When I was moved to tweet about this yesterday afternoon, I was surprised and interested by the number of responses I received. Most seemed to agree that repeatedly linking Cotton’s name with a man who had, just a few hours previously, admitted a number of sickening sexual offences against children, was wrong. Someone called me out, claiming that by talking about it, people like me were perpetuating the story and driving traffic to the Daily Mail website.

I agreed it was unfortunate that Fearne Cotton’s name would be inextricably linked with that of Ian Watkins and the coverage of his crimes but cannot and will not apologise for expressing my distaste. Yes, it might seem like a non-issue in that no-one would be stupid enough to think the media is trying to associate Cotton with Watkins’ crimes, but how disturbed must she be to wake up and find out she’s on the front of a newspaper arm-in-arm with a sex offender? Having recently had a child herself, it must be absolutely harrowing.

Keeping quiet about things that bother us is a very British trait, which is fine, but as recent events have shown, it can also be incredibly dangerous. Of course I don’t want to be in any way responsible for upsetting Fearne Cotton any more than she is already, but I’m pretty sure she’d rather know that people have noticed and raised their objections to something that is already happening to her. Are Watkins’ crimes not heinous enough? Do we need to create more victims?

If we don’t call out the media when they make mistakes, the line between poor journalistic standards and darker motivations will become increasingly blurred, along with our ability to differentiate between fact and fiction.

Maybe it’s already too late, but in a surprising departure from the cynicism that usually permeates my posts, I really hope not.