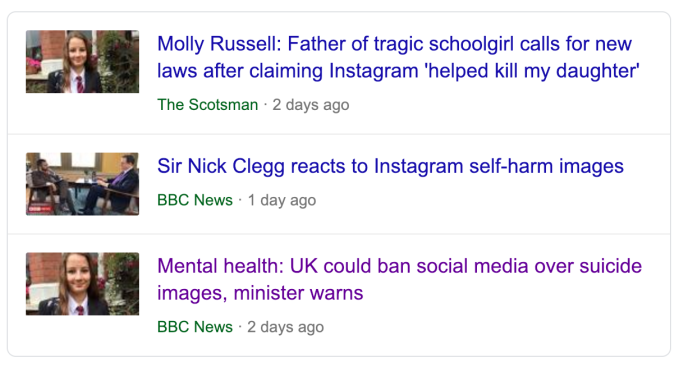 It’s been twenty years since I pressed a piece of broken glass into my forearm and drew a line. Watched blood flooding the wound, temporarily obscuring the puckered white flesh beneath. Felt dopamine flood my mind, soothing the frayed edges of my nervous system, the perfect agony driven into abeyance for long enough to make it seem worthwhile.

Unfortunately, the reflexive recoil that self-harming prompts – and that you may well have felt while reading those words – is one of many reasons why we do it. There’s no language to effectively convey the inescapable roaring in my ears back then. No words to describe the excessive energy coursing through my veins like an orchestral surge. The only way to get it out – let it out – is to cut a hole and feel it leave. The blood and the gore, the shock and the awe. The inside turned outward for the world to see.

Please. Look at my pain.

I think about Ian Russell as I write these words. Ian, whose fourteen year old daughter Molly committed suicide recently. Prior to her death it has been reported that Molly viewed a number of suicide ideation and self-harm related posts via her Instagram account. Not unreasonably, Ian believes that Molly’s decision to take her own life was influenced by the content she viewed, which apparently included graphic imagery.

As an adult, or perhaps in my subconscious mind an ‘expert’ on the drivers of cutting, burning and more creative ways of wounding oneself deliberately, I dismissed his claim in my mind without engagement. Instagram wasn’t a thing when I was cutting. Social media, the internet, forums, reddit, 4Chan; none of these things existed. I never saw pictures of cutting or read posts discussing effective methods of suicide, how to hide scars, when to go to the hospital.

Back in those days we were too busy blaming heavy metal for mass shootings. At face value headlines like ‘Instagram helped kill my daughter’ bear more resemblance to ‘[Columbine] Killers Worshipped Rock Freak Manson’ and seem about as constructive in dealing with the problem at hand. Moral panic, anyone?

As with most things (including the scabs that formed over my wounds back then) I picked at the edges of the story as the day passed. Just teased them. What was Molly looking at? What’s Ian seen that had upset him? How was he wrong in his assertion? He had to be wrong.

So I looked. This was last Thursday, shortly after Ian’s interview with the BBC and Instagram hadn’t had time to react to his allegations. Within moments, and without really trying, I had accessed disturbing imagery of cuts. Arms and legs striated with red, angry lines. Symmetry. Blood. Words. Pain. Suffering. Pride. The bleakest of terrains with no visible horizon in any direction.

And because I know enough about the internet to realise that anything Insta can do, reddit or 4Chan can do more egregiously, I visited both.

You don’t get over self-harm. Earlier I wrote “… one of the many reasons why we do it,” and I did so deliberately, knowing that I’m a bad week and a broken glass away from my teenage self. It’s still in here, dormant for the most part, but feeding and febrile. Happy to slumber.

Fortunately I have the tools and support to survive exposure to incredibly triggering images of self-inflicted wounds. To read beguiling words about community, solidarity, the promise of understanding and acknowledgement of an emotional sensation so dark, the rest of the world can’t see it, let alone engage or understand it. I was triggered by some of these things and spent much of the day in a fug, until I mentioned it to a close friend and she reminded me it’s ok to feel things.

Sometimes that’s all it takes. There is some merit in the argument that young people toying with self-harm find solace in shared experience. In simply knowing that someone can bear to look at the twisted broken mess that is you and not recoil. You don’t share this stuff with your parents because when you try, they react to the visceral. The pain they can see expunges all interest in the pain they can’t. It’s invalid. You’re invalid.

Then you go on Insta and someone validates you. Shows you you’re not alone. Normalises your experience, perhaps. Painful though that might be to comprehend to parents worried about their child’s mental health and internet activity, they will be drawn to that which comforts them, regardless of what it looks like to you.

I never had Insta. But I had books and an inquiring, relentless mind. I fed my confusion and pain with music, gory horror novels, Sylvia Plath, The Bell Jar, Girl, Interrupted, Prozac Nation. Second Star to the Right by Deborah Hautzig alerted me to the pleasures of not eating as a form of torture and I began a stringent regime of sit ups. Richey from the Manic Street Preachers Steve Lamacq inspired 4Real moment resonated with me. Placebo and Depeche Mode lyrics. Books about shark attacks in WH Smith.

Young people feel pain. If they’re lucky enough to have had a relatively pleasant upbringing, teenage angst is probably the first time they feel the dangerous thrill of it. Left to their own devices they will feed it because they’re compelled to. They will walk through its vast corridors and desolate landscapes, staring in wonder at its shapes and contours, recognising themselves within it. You won’t stop them.

All this talk of pain will be of no comfort to Ian Russell, but it would be patronising to the point of offensive to believe anything I could say at this point would make things better. If steps are taken to remove triggering material from the internet, I don’t believe it would make any difference. I found what I thought I needed without the internet and if those twisted support systems are banned, I have no doubt that the next generation will do so too.

The child you gave birth to, cherished and cared for, is not a stranger. The wounds they carve into their flesh provoke us into panic and fear, which is a natural human reaction. But they will feel you recoil and interpret it as disgust at them which merely serves to fuel their belief they are broken, or at least deformed beyond recognition. We must be better. We must be the adults and look past the wounds. If we want to address this issue, part of our duty of care is to let kids know it’s ok to feel extremes as the full gamut of emotions in the human experience flexes for the first time.

If the support systems are in the open, they won’t need to follow those dimly lit paths into the unregulated depths of the internet, where the real darkness lurks.

I survived, but I wouldn’t wish that lonely, fraught journey on anyone.