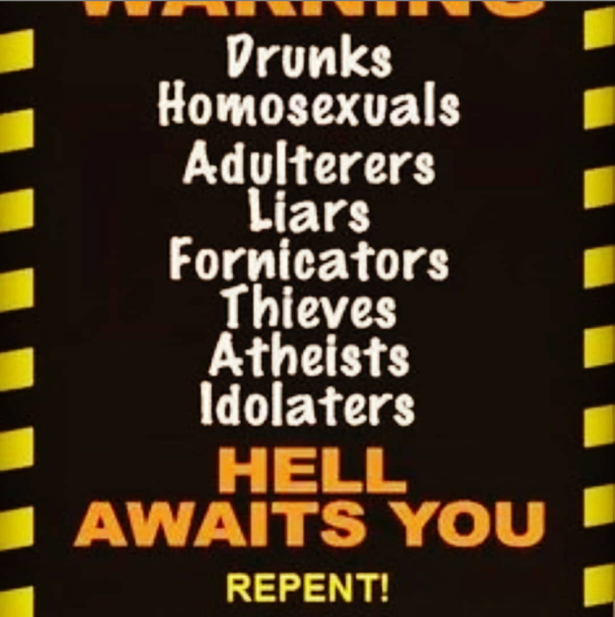 Israel Folau’s contract with Rugby Australia has been terminated after the New South Wales Waratahs player posted the above Bible quote on his Instagram account back in April.

This is Israel’s opinion. I assume he believes it with every fibre of his being and for my part, I hope he’ll be crushingly disappointed when he arrives in the afterlife, realises intolerance is a unwanted by-product of humanity and that he’s about to spend eternity with the drunk gay fornicating atheists who know how to throw a decent party.

Unlike Israel, I have self-awareness. Given the current uncertainty around the afterlife I could just as easily find myself in the grubby anteroom that is purgatory, peering nervously through the steamed up window into hell and giggling ruefully at the notion the fundamentalists were right after all. Hopefully, I’ll be drunk.

The termination of Folau’s contract throws up some interesting questions. The right to free speech has protected status in many modern constitutions (not Australia, it should be noted) mostly because history left clues as to the impact of the alternative. Indeed, many a wilful agitator has abused it to justify hate speech, forgetting that the right to say something doesn’t carry with it the right to not have that opinion challenged.

Perhaps one day we’ll look back at social media as the tipping point for free speech. The furore surrounding the recent sacking of Danny Baker for posting a picture of a couple and a chimp under the message ‘Royal baby leaves hospital’ followed a similar arc, even if the dynamic of each incident was markedly different. Folau stands firmly by the words he quoted while Baker has consistently denied a racial element to his tweet, claiming the picture he posted was “a genuine, naive and catastrophic mistake …”

Both men have had their contracts of employment terminated but their right to freedom of speech hasn’t been compromised, as some might have you believe. Any sensible employment contract contains a section about bringing the name of the employer into disrepute and in Rugby Australia’s case, their status as foundation members of Pride in Sport Index (PSI), implies a significant conflict of interest. A similar debate erupted when footballer Ched Evans was found guilty (prior to a successful appeal) of rape in 2014. Many football clubs made their interest in him public, only to suffer a backlash from fans who objected to their club picking him to represent them in competition. It wears the clothes of punishment, despite being motivated almost entirely by self-protection.

For now this is just something else to argue about on Twitter while we should be working. The 21st century equivalent of fiddling while Rome burns. But perhaps this is something we should be more nervous about. Israel Folau hasn’t just lost his right to represent Australia. Sponsorship deals – a lucrative sideline to any career in elite sports – with sportswear giant Asics and motor manufacturer Land Rover have already been withdrawn. Qantas, official airline of Rugby Australia, have been monitoring the situation.

Their Chief Executive, Alan Joyce, told the Australian Financial Review “We don’t sponsor something to get involved in controversy. That’s not part of the deal […] We expect our partners to take the appropriate action.” These words have, unsurprisingly, led to claims from Australian broadcaster Alan Jones that in sacking Folau, RA were “kneeling down to corporate dollars,” and “should be ashamed.”

It grieves me to say it, but Alan might have a point. Sponsorships deals with big business whose immediate interests aren’t necessarily in the same postcode as the sports team partnering them are increasingly common. Manchester City and Tinder? Arsenal and Rwanda? Manchester United’s ‘official global lubricant partner’ Castrol GTX?

On reflection, that last one might be plausible. But however baffling these relationships appear to be, the sponsors will ensure that their brand is not tarnished by the association, meaning clubs and organisations will be obliged to disengage with anyone who, whether inadvertently or not, threatens the integrity of an associated brand.

Something’s got to give and it’ll be the right to say what the hell we like ‘without fear of retaliation, censorship, or legal sanction’. Personally I have no problem with this when it involves words that incite and inflame prejudices, but as we’ve learned in recent years, progress isn’t cast in stone. One idiot elected to power can disrupt hundreds of years of positive development with a few poorly constructed, misspelled tweets.

I’m sure Margaret Atwood did not intend her fictional republic, Gilead, to be used as a template when US states in the Deep South are considering abortion legislation, and yet here we are. If corporate interests begin to inform what we are allowed to say, and police it via censure, it’s only a matter of time before freedom of expression becomes a homogenised, glutinous lump that cannot or will not tolerate the differences we’ve encouraged to flourish in our societies.

I’m glad Israel Folau has been deprived of the right to represent his country. His words carry more weight than yours and mine and unfortunately will act as an enabler to intolerant people who may feel empowered. But to paraphrase Evelyn Beatrice Hall (or carelessly misquote, depending on your point of view) I disapprove of what he says, but I’m so scared about future dystopias that I think I have to defend to the death his right to say it.

As someone who’s fulfilled most (if not all) of Israel Folau’s quoted criteria for going to hell, you could say my eternal wellbeing depends on it.