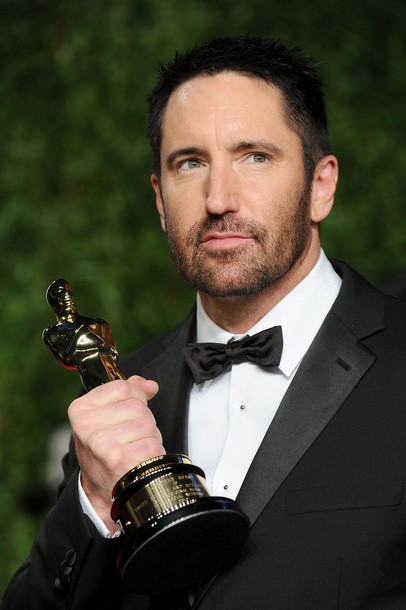 Likelihood of Trent being allowed into the Vanity Fair post-Oscar party after picking up the Best Soundtrack statue for ‘The Social Network’: 97.6%. Image: Getty Images, Daylife.

How exactly did Trent Reznor go from being a serial killer in waiting to the darling of the mainstream movie soundtrack? Did he undergo a personality bypass, or did we?

Likelihood of Trent being allowed into the Vanity Fair post-Oscar party after rifling through his mama’s make-up box and constructing his going-out costume from string & rubber alone: 3.2%. Image via metalship.org.

While it must be acknowledged that Reznor’s first album under the auspices of his Nine Inch Nails moniker was a breakout hit, it was never a radio-friendly unit shifter. The title, ‘Pretty Hate Machine’ gave most an idea of what was contained therein, but while most non post-modern rock fans didn’t snap up its brand of industrial level sound terrorism, it became an anthem album for the disaffected, disillusioned and probably slightly unhinged. And yes, I’m happy to include myself in that bracket.

22 years on (good god, I’m old), it is still a bleak listen. Tracks like ‘Sin’, ‘Head Like A Hole’ & ‘Terrible Lie’ sound like a crazy stalker person’s narcissistic justification mantra (sample lyric: you give me the anger, you give me the nerve, Carry out my sentence. While I get what I deserve. I’m just an effigy to be disgraced. To be defaced. Your need for me has been replaced. And if I can’t have everything well then just give me a taste.) and that’s him at his chipper best. The video for ‘Down In It’, the first song to be released off the album, was suspected of being a snuff movie and was the subject of an FBI investigation.

Put simply,  if it hadn’t been for the music, it’s not unreasonable to assume the man would either be living out his life in the true-crime section of your local book emporium or under a hedge as he continues to evade detection for his blood chilling crimes.

So how this manipulator of the dark arts has now become Hollywood’s golden boy? His collaborative soundtrack with Atticus Ross for ‘The Social Network’ received the ‘Best Soundtrack’ Oscar in February and the duo have just completed work on arguably the most eagerly anticipated movie soundtrack of the year, David Fincher’s remake of ‘The Girl With The Dragon Tattoo’.

Is his work more accessible, then? Well, the references to sexual deviancy and violence are less explicit, for sure, but then, our tolerance for such things has inevitably increased due to our immersion in such gorenographic delights as the Saw series and Hostel. And who else is more qualified to provide the accompanying noise to the post-gorno generation than the man who wrote the lyrics ‘your god is dead, and no one cares. If there is a hell, I’ll see you there‘.

What this means for our collective mental state is a matter for psychologists to argue about while the world is going to rat shit. I mean, I love Reznor’s work. But I interpreted the lyrics to Depeche Mode’s Blasphemous Rumours as a guide to self-enlightenment. If my taste is now a barometer of the world’s mental health, we’re all doomed.

Lyrics reproduced with the permission of: absolutely no-one. Sorry Trent.