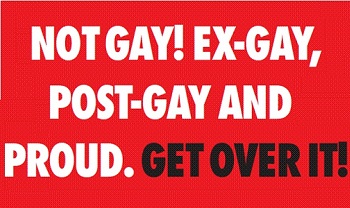 Originality of thought is one thing I had credited those promoting ‘Gay Therapy’ with.

But I’m not afraid of looking like a fool, as many people who spent time with me in my early twenties will cheerily testify. And apparently, neither are two religious groups who have followed up Stonewall’s recent promotional bus banner campaign supporting gay marriage. Anglican Mainstream and Core Issues Trust have rented advertising space, and intend to feature the slogan pictured above on the side of red buses using five London routes.

A spokesperson said Stonewall’s campaign “implies the false idea that there is indisputable scientific evidence that people are ‘born gay’, and that they have no choice but to affirm their homosexual feelings.”

Which is rich. Their advert implies that people are ‘born stupid’, and that they have no choice but to reaffirm their stupidity at every opportunity.

Are we supposed to just get over that, too?