I came very close to having a meaningful emotional experience while watching a boxing match on Saturday night. Thankfully, my natural cynicism kicked in before I collapsed into embarrassing tears over how lovely the world is, but trust me, it was close. 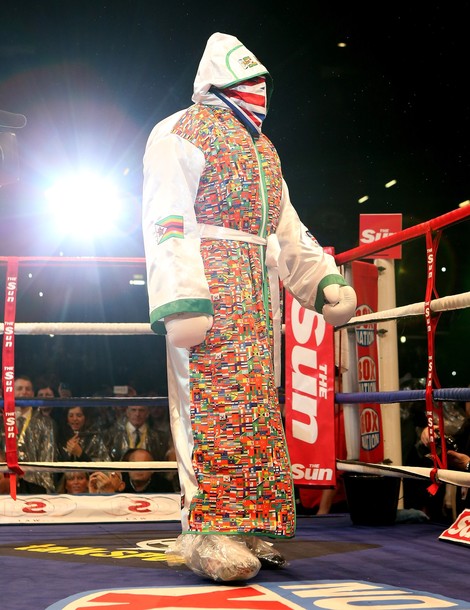 Dereck Chisora. Not getting carried away by the occasion. Image: Scott Heavey/Getty Images.

Dereck Chisora and David Haye, despite the rain, entered the ring at West Ham’s Upton Park ground in a timely manner and without getting into a punch up before the bell. In most major fights recently, particularly those involving David Haye, this has not happened.

The fight, which came about via a well publicised punch up at a press conference, did not descend into the embarrassing brawl everyone was expecting and three quarters of the crowd were hoping for. Both men fought hard, well, and within the rules and when the decisive punch put Chisora down in the fifth round, there could be no argument that Haye was the rightful winner.

In the aftermath, as the ring filled with hangers on, journalists, tv cameras and scantily clad females, Haye approached Chisora, spoke in his ear and hugged him. They touched gloves, smiled for the cameras and all hostility was forgotten. During the post fight interviews, both men were courteous and friendly to one another, and spoke of their mutual respect.

It was as though something righteous and pure had taken place. That the most traditional of ‘Saturday night down the pub’ techniques for resolving conflict had been applied and once the punches had been thrown, all was forgotten and everyone could go back inside and celebrate by getting wasted.

It was quite poignant.

Then, of course, I remembered that the resentment between the two men prior to the fight had been hyped to death by promoter Frank Warren, that they probably didn’t feel any more hostility toward one another pre-fight than I do towards my work colleagues (occasionally substantial, but rarely violent) and therefore being nice to each other was simply a resumption of normal service.

Either that, or they were on their best behaviour so the British Boxing Board of Control won’t ban them for life for taking part in an unsanctioned fight.

Sigh. At least Amir Khan got knocked out. The night wasn’t a total blowout.