Was Phillips on admin duty at the time the South Korean flag was displayed while North Korean soccer players warmed up? Original image: whatsonxiamen. Photoshop: baggytrouseredmisanthropist.

Phillips Idowu is one of the few British athletes who stand a chance of medalling at the Olympics, so it’s no wonder his recent bizarre behaviour has caused some consternation amongst the authorities.

Phillips failed to turn up for the Team GB training camp in Portugal, claiming he was injured. However, requests for copies of his medical records from the British Olympic Association have so far failed to provoke a response, and UK Athletics head coach Charles van Commenee has stated that he has no clue whether Phillips will be participating.

There has been speculation that Phillips might be ‘playing mind games‘ with the BOA and fellow competitors. Given the varying degrees of success the opening events have met with, that isn’t beyond the realms of possibility. 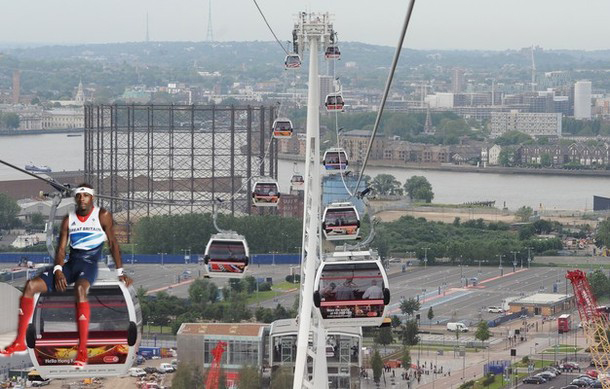 Was he in charge of the cable cars when they broke down yesterday afternoon, stranding more than 60 passengers in the mid-air scorchio heat of London town for 40 minutes?

Has he been taking advantage of the fact that he is one of only about thirty people in the UK currently able to use the ‘Olympic Lanes’?

Or perhaps he’s just managed to evade the notoriously stringent security checks. Unlikely, of course, but you never know.