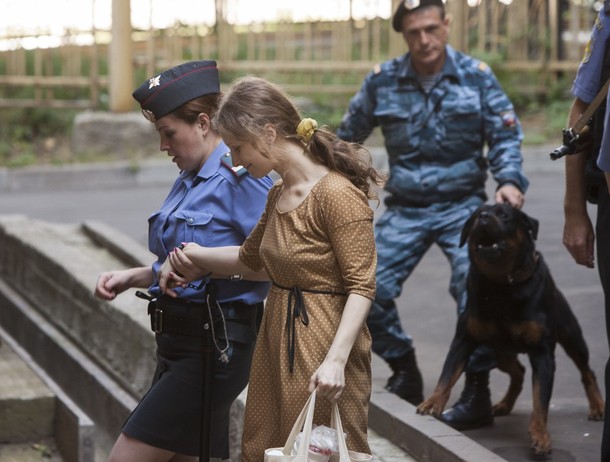 How come the dangerous punk revolutionary is dressed more appropriately for court than her guard? Image: AP Photo/Alexander Zemlianichenko.

Clearly punk feminist collective Pussy Riot knew that they would face severe punishment for attempting to sing a protest song inside a Russian Orthodox church while wearing badly knitted balaclavas. Presumably they were counting on the heavy handed treatment meted out to them by the Russian authorities being picked up by the global media, encouraging high profile figures from the music community to offer their support and further publicise their cause. 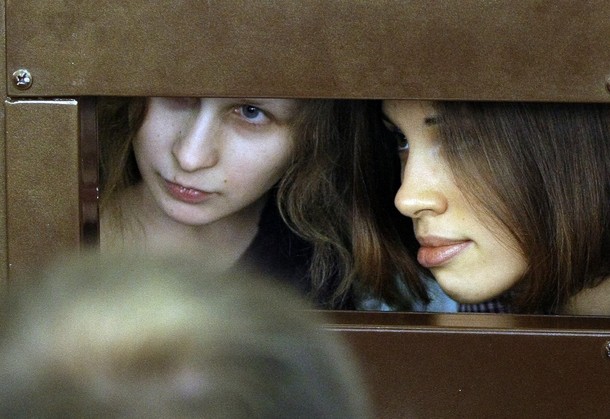 But surely they would never have dared to dream that the judicial system would enter into the fray with such good spirits and in doing so,  prove their point for them – that Russia is so utterly unprepared for and unwilling to countenance progress that even with the eyes of the world fixed upon them, they will crush any youthful uprisings with a Soviet Era jackboot so outdated, it has taken on an air of the comedic.

Rottweilers in the court room, defence witnesses rejected while the prosecution rolls out punter after punter who wasn’t actually in the church at the time, but heard about the incident and was offended enough to seek it out on Youtube, rumours that the women are being denied basic human rights and the fact they’re forced to sit in a glass box during their trial, presumably to prevent them from slipping on a threatening cardigan and doing it all again.

Even Vladimir Putin has felt the tremor of international embarrassment, urging leniency from the court. But speculation is now mounting that the court will dish out the full seven years prison sentence just to emphasise they’re no one’s bitches, least of all Putin’s.

But even if this happens, we should not underestimate the magnitude of Putin’s concession. The first shots have been fired in a war that will end with the collapse of a creaking empire and the emergence of an exciting new era in Russia, where freedom of speech is a right of the masses and not just a privilege of the few.

Pussy Riot have mortally wounded the Russian state system and the lengths their supporters are prepared to go to (l) in order to articulate their strength of feeling describes a movement already gathering pace. It will take time and other, huge, personal sacrifices from brave individuals, but it will come.

The fact that those shots were fired by three women wearing woolly hats seems somehow appropriate, given the anachronistic absurdity of their foe.