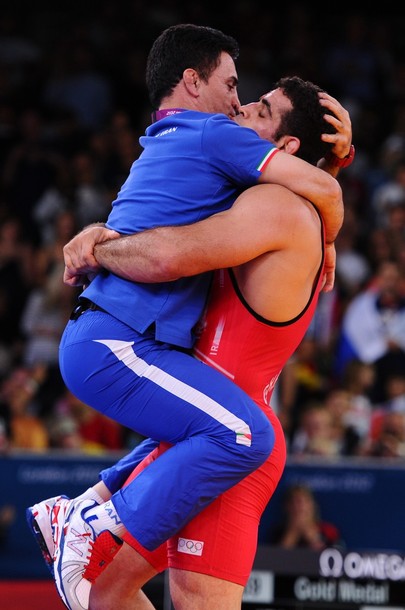 Just bask for a moment in the sheer unadulterated joy of two men so overwhelmed with emotion after one of them wins the Greco-Roman wrestling heavyweight gold that they kiss.

And then hope miscellaneous idiots from across the globe don’t get the wrong idea and run with it.

Actually, scratch that. Let’s have this guy (located via @homophobes) tell Rezai what he thinks to his face.

We can all watch how that pans out for him together.

No, seriously, you won’t believe how red it is! Image: REUTERS/Tim Wimborne.

I suffered the ultimate grown-up indignity last week, when a failure to pay attention to my gait resulted in my falling over in the street. I know. Fortunately, the world’s TV cameras were not trained upon me at the time and I manage to gather myself and continue on my journey without a video of the incident going viral before I arrived at my destination.

The fabulously named Stephan Feck (if you don’t know why that is a fabulous name, go away and reorganise your comedy priorities) was not so lucky on Monday after a tiny slip caused him to land on his back in the diving pool.

Oh well. At least his future as the star of ‘sporting gaffe’ shows is secure. He’ll be thrilled with that.

Have you checked down the back of the sofa? Images via fourth-place medal, Ezra Shaw/Getty Images.

A missed opportunity for Team GB last night, as Robbie Grabarz’ storming performance in the high jump won him a bronze medal.

But it could have all been so different. Y’see, earlier in the evening, fellow competitor and eventual winner, Ivan Ukhov, lost his athletic vest and had to delay his jump while he looked for it. Unfortunately for Ukhov, the vest was nowhere to be found and in order to prevent the competition moving into a second week, the official recommended he just put on a t-shirt that happened to be lying around. He did, and completed his jump successfully.

Just imagine if Grabarz had done his research into the other competitiors! Ukhov showed up drunk to an event once, implying the possibility of a lack of preparedness just screaming to be exploited. Grabarz could have nicked his vest (he denies he did it, for the record) and replaced it with say, a morris dancer’s costume. Ukhov might be eclectic, but there’s no way he would’ve been able to clear 2:33m while festooned in all that stuff, so he’d have been knocked out and GBR would’ve picked up the silver.

Forward planning, people! Do I have to keep saying it?!

Finally, the fast food industry are fearing for their profit margins after Jessica Ennis picked up the gold in the heptathlon last Saturday. Concerns are rising that young people will figure out that the lifestyle choices currently being sold to them by Olympic sponsors – consumption of burgers, fries and milkshakes while lying on the sofa pouting and posting the pics on Facebook – do not seem to result in the kind of obesity levels that propelled Ennis to glory, and may eschew them in favour of the kind of healthy diet and exercise regime that might help them to emulate her.

Let’s pray they forget about it, before they can take up athletics and make us proud.