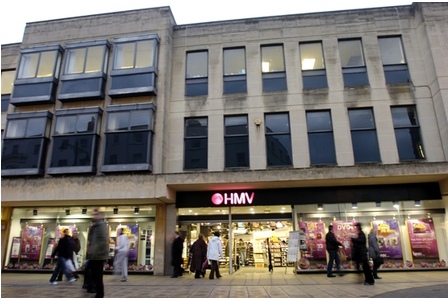 HMV Cheltenham. Without you, I’m nothing.

Call me a child of narrow horizons if you will, but when I was growing up one of my dreams was to work in a record shop. I spent my teenage years playing music, talking about it, buying it and stroking its packaging, so it was fairly obvious that music retail would be a natural fit for me.

It was, but not for the reasons that I imagined. I’m not generally prone to bouts of nostalgia, but news that HMV has gone into administration this morning has made me go all mournful for a period of employment that was supposed to be incidental but actually shaped my life.

I didn’t know that at the time, of course. But then, I was mostly drunk.

I must make it clear from the outset that at the age of nineteen, I was an utter dick. Despite my incessantly expressed desire to work in the newly appointed HMV store in my local town, I passed out while giving an introductory presentation, pissed and moaned constantly whenever I was given actual work to do and spent most of my time hiding in the folk section, planning my social life with friends who were happy to exploit my constant availability.

My boss, unsurprisingly, lost patience with me on a regular basis. I resented his constantly nagging, believing I was the target of a highly unfair and unwarranted campaign of hate. Only later, when he finally (correctly) figured out that the only way to stop me from socialising on company time was to put me in a room on my own and lock the door (he made me cashier) did I finally start to grow up. I got to grips with it, pulled my head out of my arse, stopped turning up to work with a hangover and within two years was the main contact for all cash offices in the region.

Cheers, GK. Looking back, I’d have sacked me so fast my army booted feet wouldn’t have touched the flea infested carpet.

I bonded with all manner of people over stock take guns, cardboard boxes full of CDs that needed stickering, cardboard boxes full of CDs that needed stickers removing and a mutual contempt for the people who stood outside our shop at midnight openings. Back in the day, music retail was an employment option for all manner of random people, and I’m happy to say that during those hours of carrying out mundane tasks I made some of the best friends I have ever had in my life.

Oh. And there was beer. Did I mention that?

I loved music when I was a kid, but it was only when I began to work with it that I slowly realised how narrow my focus had been. At the time I refused to countenance anything that wasn’t metal, or at least hard rock, and made a point of being rude about anyone else’s choices at every opportunity.

Fortunately for me, (and everyone else’s eardrums) Slayer at full volume did not usher our customers towards an act of purchase. I know. I tried it frequently. The playlists we were given for the week included all manner of genres and artists, few of which I had been exposed to before, and, although it made my skin crawl on a daily basis, I gradually learned that the level of aggression with which a hairy man plays a guitar is not necessarily an indicator of quality. Other, different, genres insidiously wove their way into my favour to the point where I actually purchased a Saint Etienne album. On vinyl.

I did keep it a secret for a while, but my point is, sustained exposure to things you don’t like can be a learning experience.  It’s one I’ve never forgotten.

I could go on forever. I could tell you about the time we had a powercut in the shop, bullied the assistant manager to let us go to the pub, then got the barmaid (a recognised stooge) to lie and say we weren’t there when the power came back on and the frantic AM rang to get us all back.

That as a result of my sterling work in the cash office, I developed the utterly nontransferable ability to accurately pick up £1000 in £20 notes from a pile.

Or that it was me who lost the safe key that time. Not the assistant manager. Whoops.

But I won’t. Suffice to say, a big salute to all my friends from then, colleagues, management, the mob who worked in Virgin down the road, who we were banned from associating with but met every night in the pub after work to compare notes and try to outdo each other with tales of how shitty we thought our jobs were.

I like to think that secretly we all knew how lucky we were. I do.