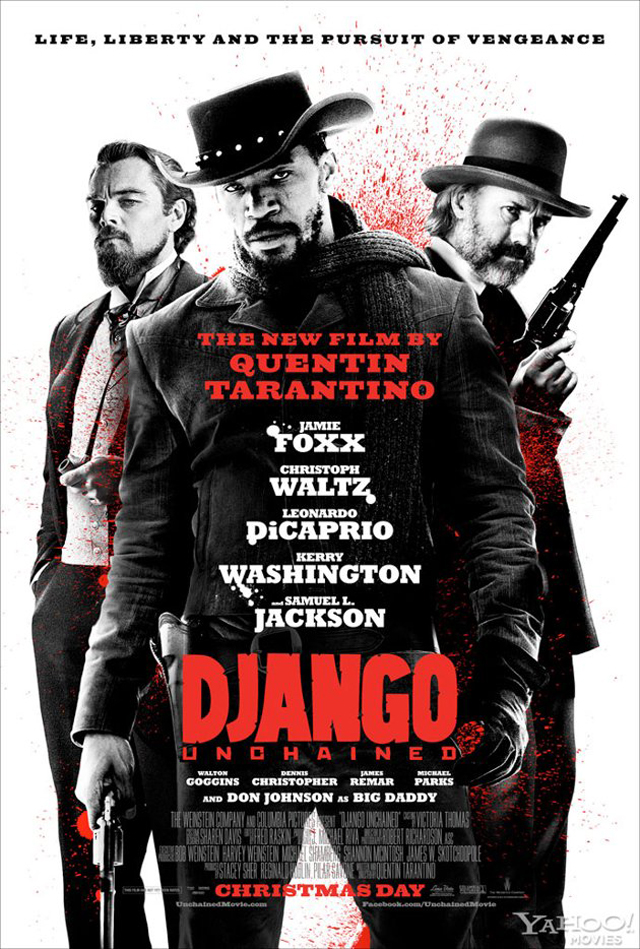 In a world where political correctness, guilt and ignorance conspire to make abstract debate on virtually any subject impossible without offending someone,  a humorous ultra-violent movie about a slave in America’s Deep South of 1858 should not have made it past the studio slush pile. Apart from the obvious issues surrounding guncrime in the US, there’s something inherently tasteless about aisles of middle-class people snickering into their popcorn as that word is joyfully hurled about like so much blood and gore.

It’s a testament to Quentin Tarantino’s irrepressible talent and guile that he not only got the green light to make Django Unchained, but he pulled it off, made an epic and, in a knowing nod to all the haterz, blew himself up during his inevitable cameo.

The man brings new meaning to the word irritating.


Are you better placed to discuss racial intolerance than Samuel L Jackson? No? Well, shutthef**kup then.

As five recently purchased and shackled black slaves were ushered through the woods by two white men on horseback to the strains of a spaghetti-western stained opening theme, I felt a swell of pride. Each of my prejudicial expectations was neatly fulfilled in the first five minutes – something that would have roused the suspicions of a far better film critic – but I settled into my seat, so busy racing down the road of outrage that I travelled straight past the glaringly obvious signposts to AllIsNotWhatItSeems-ville.

“So for the time being, I’m going to make this slave malarkey work to my  benefit,” says Django’s unlikely cohort Dr Schwartz, mere moments after rescuing him from the clutches of the evil but unerringly dim Speck Brothers. “The sheer cheek of it!” I silently cheer, scribbling invective onto my already surrendering notepad.

One hundred and seventy odd minutes later, I sat in a heap of torn out and screwed up notepaper, wondering what the hell happened. It’s embarrassing to have your own prejudices and self-righteous opinions about how a subject ‘should’ be  dealt with plucked from your bosom and effortlessly deconstructed in front of your eyes, but Tarantino does this so effectively it borders on rude. At some point during the narrative (definitely by the time the rap scored gunfight in the plantation house took place but not before Calvin Candie (a sensational Leonardo DiCaprio) casually threw a slave to a gang of slavering dogs) I realised that not only was Django Unchained’s treatment of a tremendously complex subject thoroughly entertaining, it’s bombastic approach brutally and efficiently dealt with intolerance of any kind.

That said, if you’re actively looking for something to take offence to, there’s plenty here. But before indulge yourself in the righteous indignation you might feel as QT extracts humour from an early incarnation of the KKK struggling to see out of their newly sewn hats before a raid, ask yourself whether we should be making films that cater to the needs of people who don’t understand what such a hateful and pathetic organisation they were and still are.

If so, take a look at yourself. You might well be part of the problem.