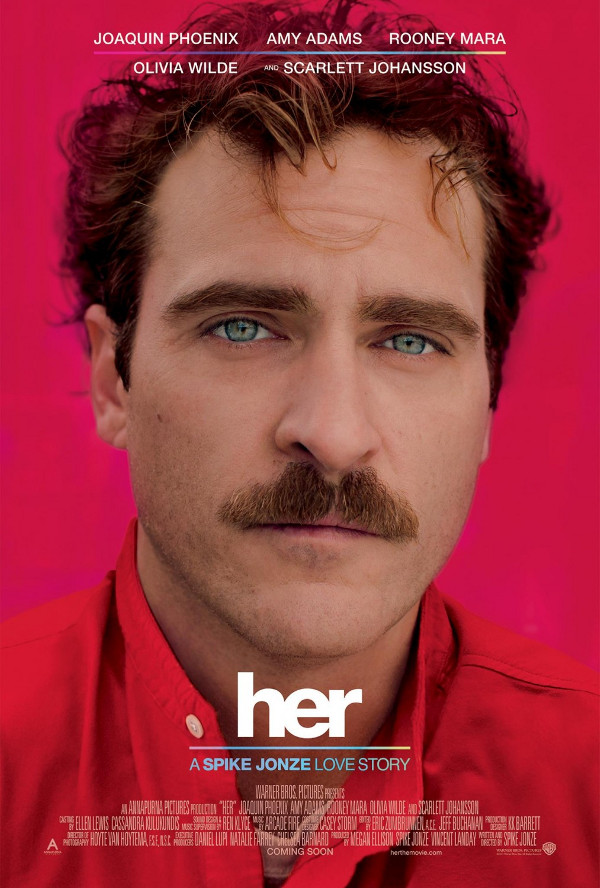 “For the first, maybe, 20 seconds of it, it had this real buzz. I’d say ‘Hey, hello,’ and it would say ‘Hey, how are you?’, and it was like whoa […] this is trippy. After 20 seconds, it quickly fell apart and you realized how it actually works, and it wasn’t that impressive. But it was still, for 20 seconds, really exciting. The more people that talked to it, the smarter it got.”

In this quote, Spike Jonze is describing an article he read explaining instant messaging with artificial intelligence. This was ten years ago, but it was this article that planted the seed of an idea that eventually evolved into ‘Her’. ‘Her’ has attracted numerous plaudits, including five Oscar nominations & a 94% approval rating on rottentomatoes.com, but as far as I’m concerned, he might as well be describing the film itself. 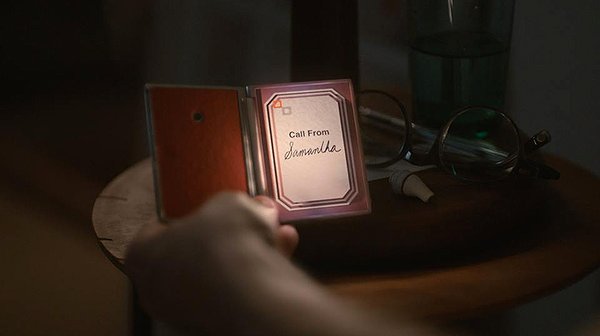 To summarise, at some unspecified point in the future, a lonely moustachioed man struggling to come to terms with the failure of his marriage buys an ’empathetic’ operating system for his computer. The OS is designed to interact with it’s user and evolve emotionally. They fall in love, it gets complicated, she suffers an existential crisis, they bicker and she ends up leaving him.

Like he said. Initially there’s a real buzz. It feels trippy and promises much. Then you realise how it actually works and it falls apart.

For me, the first problem lies in the conventional arc of the relationship between Theodore the man (Joaquin Phoenix) and Samantha (Scarlett Johansson) the OS. She might have supremely clean lines and an unquestionable ability to blend into an austere, open plan apartment, but Samantha’s character remains bog-standard rom-com woman. Close your eyes at any point in their relationship and the giggling, the sex, the conversations, even the moody silences are as tedious as any you might find in the most moribund representatives of that particular genre.

But that’s not the killer blow and nor should it be. With ‘Her’, Jonze is exploring a hinterland of human emotions, stripping everything back and picking through the debris to find what makes us actually human. We’re not far from a time when emotional connections with machines are viable and given the loneliness many experience in our brave new world, there’s no justifiable reason why such relationships should not be fulfilling. The vague discomfort experienced by a minority of the characters when they discover Theodore is ‘dating an OS’ gently draws on the same fear of unknown quantities and difference that inspire homophobia and racism. It’s alarmingly relevant.

The exercise loses it’s sure footing in the second act though. Samantha’s selling point, her emotional evolution, inevitably reaches a point where she outgrows Theodore and she begins to question her place in the world. Forgive me, but it’s boring enough watching people have an existential crisis. To the person experiencing said crisis, it’s completely absorbing and resolving it fundamental to their future happiness, to everyone else it’s a self-indulgent mess best kept under wraps.

Samantha’s exploration of her own rapidly expanding self-awareness inevitably results in resentment and there’s no palpable tension as we slide inexorably back into Theodore’s bleak reality. It feels like the moral of this tale was supposed to be that relationships can be forged with any emotionally intelligent entity and that pain and loneliness is common to all of them, regardless of whether there’s a body involved.

When the camera drew back on Theodore and his friend Amy (also abandoned by a byte hungry OS) sitting sadly on a roof in the final scene, lost in their own thoughts, it occurred to me that Jonze, with this movie, has inadvertently revealed another, rather more prosaic truth about human beings and computers.

No matter how much we evolve as people and they evolve as computers, it’s will always be bloody impossible to understand them properly and make them do what we want. In some ways, I suppose that’s reassuring.