Opening an article about idols by declaring that I personally don’t believe in idols feels like one of those trite writing devices I spend much of my time bitching about.

Designed to create tension where none exists and prompt people to to click a link to find out how a protagonist resolves that tension (even though they’re no more than vaguely interested) is an almost acceptable practice in internet writing. It even has a name, but I’m warning you in advance that this post about the roles Madonna and Shirley Manson have played in my life does not pit the two against each other in a beautifully lit Tarantino-esque battle for my soul.

It’s a think piece that was catalysed (ironically) by a Facebook post I read the other day.

Regular listeners may recall my open letter to Madonna back in 2012, in which I outlined all the reasons why I was calling an end to our association. The relationship had been on the wane for several years, but her aggressive attempts to keep herself relevant to a public with changing tastes were increasingly at odds with the values I’d accrued on my path to adult female, and consequently her position in my life had become untenable.

Madonna, as you can imagine, was inconsolable.

It was facetious piece, naturally, but the fundamental point was pure. As someone frequently confused about my role and function while growing up, powerful, strong women fascinated me because they seemed to have everything I didn’t. As a kid, it’s almost instinctive to find out who you are by trying different personalities on to see which fits best. Even if it does leave you confused about the importance of perky breasts to your existence.

Some might say that instinct never leaves you. We all move on, develop new interests and traits and (hopefully) learn that it’s our uniqueness that propels us forward, rather than our ability to emulate a popstar, but the absence of the traditional community setting in which role models abound forces us to look further afield if we do still feel confused or alone.

Society isn’t exactly geared to propagate a healthy, well balanced, emotionally stable population, what with its market forces intent on promoting consumption on demand and simultaneously burdening both men and women with unrealistic expectations. We need all the help we can get.

It’s on this vehicle that I arrived, somewhat tardily and almost certainly with cider and blackcurrant stains all over my face, at the doorstep of Shirley Manson.

I was twenty the year garbage’s first album came out – knee deep in my dream job of record shop assistant and a bout of depression that would offer no opportunity for parole for a good few years. Twenty years old and grown up, but no more understanding of the world around me and my role within it than I’d had when I’d been strolling round my parent’s living room wearing cords brandishing a cassette player that played ‘Like A Virgin’ on repeat.

Those songs – SuperVixen, Not My Idea, Stroke of Luck, Dog New Tricks – weren’t by any means groundbreaking additions to the alternative music genre, but Manson’s lyrics gave a voice to the darkness within me that wilfully rejected my attempts to understand it. She had answers. 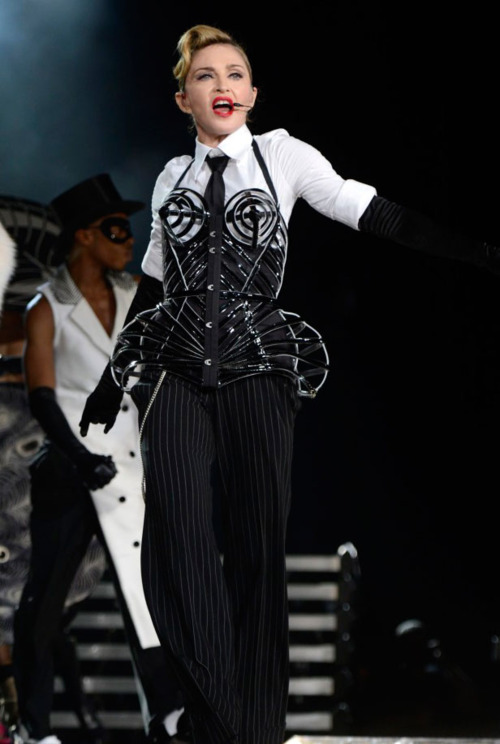 The idea that someone might have once occupied the space that I did and went on to find freedom in a form I aspired to was, unsurprisingly, hard to resist.

I embraced her and she repaid my faith with a soundtrack that has the capacity to plunge me into the freezing waters of my vulnerability with a single guitar line even now. Which is a lot more pleasant than it sounds.

I don’t listen to garbage that much any more. Or Madonna, as it goes. As time past the voices in my head changed frequencies and were more specifically and sympathetically catered to by other musicians, writers and my own self-confidence, which eventually turned up, bemoaning traffic and inclement weather for the delay. I learned to represent myself, regardless of what the world said.

As I read it, I felt the years contract. I remember the intensity of that age and am so grateful that I, like Shirley Manson, can now look back on it fondly; firstly as a time I survived, and after that a time I learned and grew.

I didn’t have a clue what I was doing back then, and most of the time I don’t have a clue what I’m doing now. But it’s reassuring to see that someone I looked at for guidance, however subconsciously, is brave enough and proud enough and honest enough to admit they survived too and they’re happy. It might come across as trite, but if one person were to read that post, or even this one and hang on in there because of that hope we can convey, who gives a shit?

Maybe if we had more trite and fewer tits, the world would be a better place.