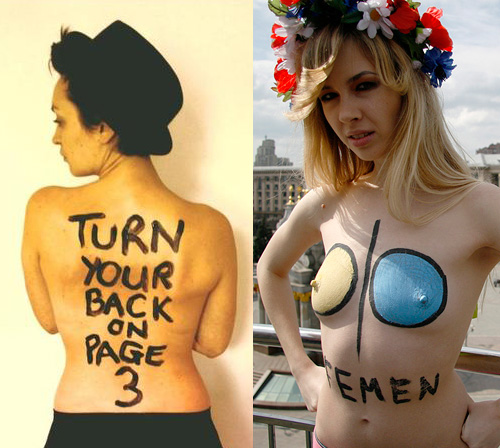 Women: developing the freedom to express themselves however they goddamn please.

Feminism is, according to Netmums at least, dying a death again. According to a survey on their site last week, only 1 in 7 users identified themselves as a feminist.

For the sake of convenience, I call myself a feminist, but I wasn’t remotely disappointed with the response. In fact, I was quite surprised that as many as 15% of those surveyed were prepared to associate themselves with a philosophy that has been deconstructed in popular culture to the point where it’s widely believed that if you don’t hate men, like body hair and have a girlfriend, you’re not allowed in.

For all I care, feminism as a concept can go the same way as ladettes, girl power and all the other unsuccessful attempts to rebrand female empowerment into something we can cope with. No single term can be used to describe how women feel, the world they live in and what they want to achieve for themselves. Especially when the empowerment they offer is obtained is through emulating males, whether through excessive drinking, promiscuity, gang culture and violence.

Women are not less than men, we are not more than men. We have our own way of doing things and if you want evidence that empowerment and self-expression is on the rise, you’re not going to find it surveys.

Have you heard of the Everyday Sexism Project, which provides a forum for women (and men) to describe instances of sexism they have witnessed first hand? It might be an advert, an experience or even a discomfiting feeling at the bus stop. You know. All of those things thousands of women experience everyday but keep quiet about because being told you need to get a sense of humour, it’s just a bit of fun, has gotten old. It might not seem like a big deal, but the number of people contributing implies that it’s a huge issue and if we’re being honest, suppression of those kind of stories hasn’t been working out too well for anyone lately.

Shared experience is vital to this process but isn’t the be all and end all. A desire to reclaim the female form is also manifesting itself strongly, in powerful, but very different ways. Lucy Holmes’ NoMorePage3 petition, currently at 51,000 signatures and counting, makes the point that while it may have been appropriate thirty years ago to have female breasts in a ‘family’ newspaper, it’s an embarrassing anachronism today.

These movements choose to empower themselves by conveying their feelings through a collective. FEMEN, on the other hand, are reclaiming their bodies and their space with rather more militant action. Their topless protests use nudity in a powerful, non-sexual context. They’ve clocked onto the fact that running at people topless tends to confound the shit out of everyone, because aren’t boobs meant to be sexy? Did The Sun lie?

I’m not one to be running round IKEA with my titties out. But that doesn’t mean I can’t stand back and admire what FEMEN are doing. The above ideas may be wildly different in their execution but they are all indicative of a single idea: that women AND men are suffering under current cultural attitudes and want to change things for the better.

It doesn’t matter what it’s called and how many people identify with it in a survey. It’s happening. You either get it, or you don’t.