Note to terrorists. If you’re trying to make a political point, don’t waste time with bombs and guns and violence.

There’s a much more effective way to threaten the very fabric of the civilisation. Get your boobs out** and run around. Even better, hurl yourself at expensive trinkets held so dear by the hierarchy. The panic on the faces of those paid to look after them hints that it might be a surprisingly rich vein. 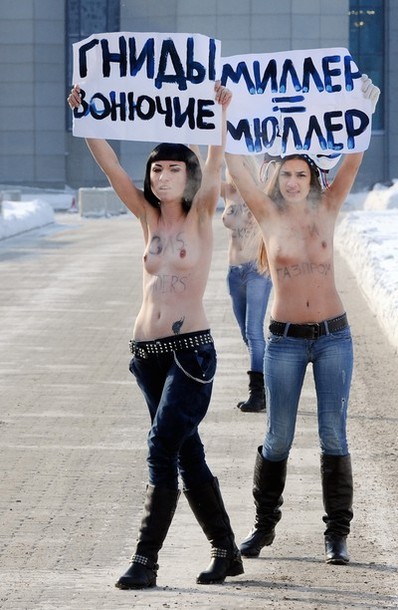 FEMEN, a Ukraine based feminist action group, have been doing this for months now; their latest target being the EURO 2012 trophy, which is currently on a tour of the country prior to the tournament kicking off on June 8th. The group are trying to increase awareness of the vast surge in demand for prostitutes surrounding such a tournament, but they have many motivations. A few months ago, they gathered outside the Gazprom headquarters in Moscow to draw attention to “Vladimir Putin’s gas moguls from Gazprom manipulating European countries that depend on Russia’s gas supplies.” The ground temperature was estimated to be in the region of -30. They were practically naked.

The most recent protest was slightly warmer. It involved FEMEN activists breaking through security cordons and shoving the EURO 2012 trophy off it’s plinth. It went viral. The Ukranian authorities went mental.

Some may decry this form of protest as a cheap way of gaining publicity, but that’s missing the point. FEMEN, who didn’t invent the concept of women reclaiming their bodies through nudity and certainly don’t claim to have done so, have identified and are trading on the point that when female nudity is removed from a sexual setting, both men and women recoil from it. Far from being titillating, it becomes threatening, confusing and something to be covered in a blanket and bundled into the back of a van.

This is merely a glimpse of the vast disparity between our attitudes to female sexuality and the reality of it. FEMEN are going to exploit the hell out of this and by refusing to go away, they will force people to confront their responses towards sexuality.

They’re going to take an awful lot of shit for it though.

**Obviously actual lady boobs are required for this to work. Owners of manboobs and/or plastic boobs need not apply.  Sorry if you think that’s sexist.

One thought on “FEMEN: You Can’t See Tits On The Radio”