In olden times, before Facebook and Twitter were things, we had no portal to air our feelings on matters that we had no prior knowledge of, so we limited our explosive rants to subjects we were vaguely qualified on or just made a massive fool of ourselves down the pub.

At least then we kept our friends entertained.

These days, it’s all hot take by headline. Scroll down your feed, catch a glimpse of a story that reaffirms your well trodden prejudices and post it. Ironically, the more misguided you are in your accompanying comment, the more people seem to agree with you. (See also: Donald Trump).

Today, my Facebook timeline is littered with references to the heroic work of one Samir Carruthers, a 22-year-old MK Dons midfielder who, alongside Northampton Town striker James Collins, appears on most of the tabloid front pages today peeing into a glass and tipping the contents over a balcony.

Revolting, yeah? Not to mention exceptionally stupid, given you’re at Cheltenham Races; an event now so infused with nauseating spectacles of every conceivable variety that a fairly hefty proportion of the crowd is made up of paparazzi desperately hoping for an exclusive of someone vaguely notable falling over or slipping in a horse shit while wearing a fascinator.

It’s your right to share this story with accompanying expressions of disgust, including (and quite often limited to) references about ‘overpaid primadonnas’ and ‘terrible role models’. It’s a disgusting act that the players should be punished for.

But using it as a weapon to beat football with is poor.

Just as it is to make a judgement on an entire sport, its athletes and infrastructure based on the actions of Ched Evans or Adam Johnson. Football is a world with a population, and like any population, it has its fair share of fucking idiots. But that doesn’t mean we’re all fucking idiots. I could equally make a judgement that because there are some people on Facebook that choose to react to particular stories because they like having their ill-informed opinions reflected back at them, everyone on Facebook is like that.

But I don’t, because that would be offensive and stupid.

Honestly, if you care about the conduct of footballers and their fans that much, learn something about it. You’ll find endless examples of heroism, kindness, shared grief and joy, as well as the industry standard joy to be found in a bloke making a tit of himself in front of 50,000 braying fans.

What about the time Feyenoord fulfilled a terminally ill supporters dying wish to see his team play one more time?

Or when Cristiano Ronaldo, bronzed, fleet footed man tart of La Liga, paid $83,000 to ensure a young fan could have the surgery he needed to have a chance at a normal life?

How about last weekend, when two men suffered heart attacks during Borussia Dortmund’s Bundesliga fixture vs. Mainz. After learning that one of the men passed away, players and supporters of both teams spontaneously gathered to pay their respects.

Sadly, none of these events, or the hundreds of tiny gestures that happen every day in our game serve the ‘narrative’ so no one is really interested. But at least I bothered to write this instead of hitting Caps Lock and diving in to make a point about how football is like Nazism. 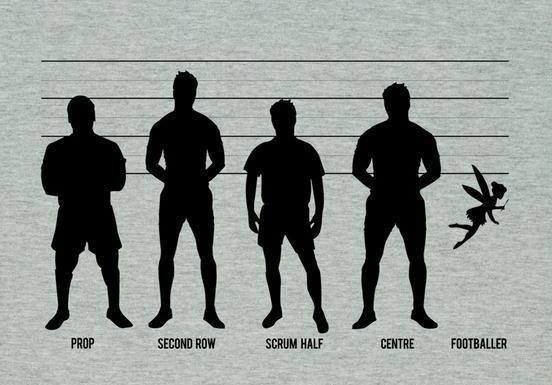 Anyway. Enough of that. You’ve been told. But just as a final thought, this ‘hilarious’ picture that almost always appears at some point in a thread under one of these statements, is really offensive.

Indeed, one of the greats of your sport, Gareth Thomas, probably wouldn’t find it amusing, given the connotations it’s drawing on to make its shabby point. You should think about that next time you condemn racism, homophobia or whatever else is prompting you to answer the omnipotent question swinging gently above our heads all the time now.