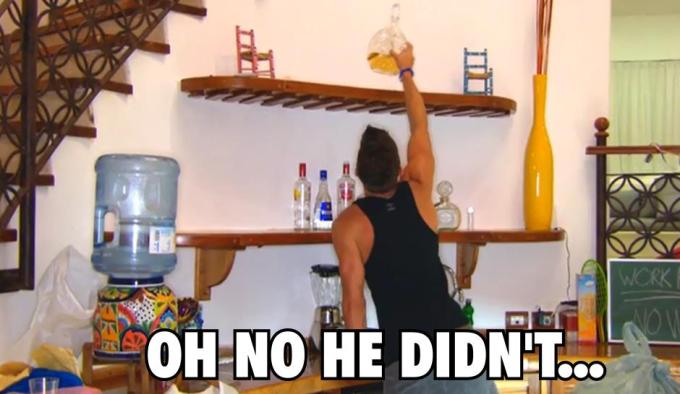 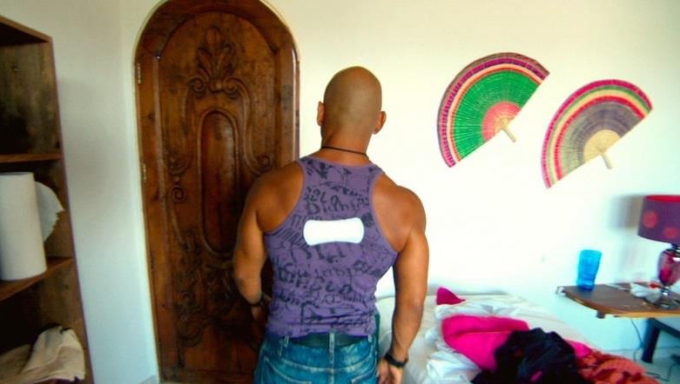 Cancun Chris. Unfortunate. But is this sufficient provocation to torture and kill? Images via geordieshoreonline, geordieshoreweb.

Last time we caught up with the tashers-on of Geordie Shore House, Cancun, they had just been warned by their swarthy landlord of the repercussions of falling foul of his extensive list of rules. One of those rules happened to involve the consumption of a bottle of tequila, which was handily placed just out of reach on a high shelf. The tequila was apparently an heirloom, or expensive, or maybe just a decoy, but the man obviously hasn’t got kids if he thinks a bit of wicker tat on a wooden structure is going to prevent athletic binge-drinking boys from getting at alcohol.

The surprise was they hadn’t emptied it down their necks before. But we’re getting ahead of the narrative here. Before we delve into theft, impromptu road trips and what is essentially kidnapping by another name, what other highlights have you missed by having a life?

Well, firstly, James broke his leg doing manfighting. As previously discussed, despite his optimistic demeanour and simply smouldering combover, James would be unlikely to pull in a brothel. This isn’t just conjecture, it has been tested. Cancun on Spring Break basically is a brothel, albeit one where you are guaranteed to get sand in your underwear (it’s not just an optional extra), and so far, James hasn’t actually managed to avail himself of a single Worldie.

Under normal circumstances, this should have stamped on any vague, pathetic hope James may have had of achieving intimacy in company, but Holly, who has been surreptitiously stalking him (shouting ‘I want to f**k you in his vicinity) since Series 2, is rather more devious than her FF’s might suggest. When James arrives back at the house with a plaster cast and a pair of crutches only 36% of him is in full control of,  Holly is in his sick bed, humping the life out of him before you can say ‘why aye, this has all gone a bit radge. I must be fookin’ mortal.’ 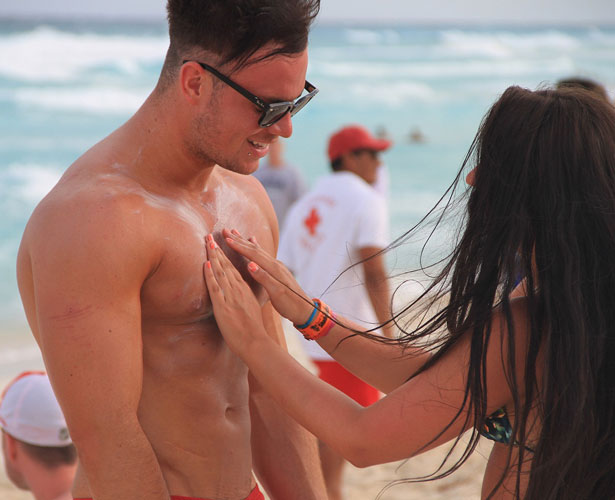 This is Joel making friends with a lady who isn’t Sophie. A familiar sight in Geordie Shore. Image: heatworld.

It was at some point during all this merriment Joel had sex with Sophie in the pool. You’ll remember Joel. He’s the wing nut who Sophie is in love with, despite his continual flirting with women IN FRONT OF HER FACE. The Viewer quite likes Sophie, but is losing patience with her blindness, and the fact that during the course of his stay, Joel has somehow managed to curry favour with Sophie’s housemates. Even Vicky, who last time round described him as

… like Chlamydia, easy to pick up but a nightmare to get rid of.

So Joel and Sophie’s ‘relationship’ struggles on, and they’re still having sex, which presumably is a good thing. It was a sober union though, and a serious departure from the usual vigorous night vision humping, but only because Joel needed to make certain his hairdo didn’t move. For those who haven’t had the pleasure, the hair is a peculiar hybrid of approximately four hairstyles, including (but not limited to) a smoothed down combover and a Burger King party hat.  Joel is not just indecisive when it comes to women, y’see.

The Viewer expresses disbelief that Joel Corry is the subject of such intense interest from women when he quite clearly has the IQ of a pot plant, but a bag of Jelly Snakes assuages her ire and we move on to Tequila-gate.

It should be noted that before Gary defied Cancun Chris’s threat to f**k up whoever drank the Tequila, the great man had already offered a taste as to what that punishment entailed. After committing some felony that The Viewer cannot be arsed to remember but most likely involved a combination of fighting/swearing/drinking and/or not tidying up the house, Cancun Chris orders Vicky and Holly to get in a taxi and pick up a package from an undisclosed location.

Two days, a lot of sweating, shouting and confirmations that an angry woman can make her instructions plain in any language later, Holly returns to the house, sans Vicky. Ricci, being the chivalrous sort, pulls on a pair of action espadrilles and  heads out to to find his woman. He doesn’t come back for several days either.

The Viewer, having now understood the intricate details of Cancun Chris’s unique style of torture, opens yet another packet of crisps and settles down to watch Gary steal the Tequila.

The actual theft itself is not important, you understand. Drunk man-boy gets mouthy and to show off in front of his mates, he climbs up onto a piece of furniture and takes a bottle of alcohol that doesn’t belong to him, pretty much covers that. He confesses to Cancun Chris and has to choose another housemate to take to buy another bottle. He picks Charlotte and the two go heading off in the back of a van with a man they’ve never met before to an undisclosed village in the middle of Mexico, where they are seemingly abandoned among the cockroaches.

The Viewer is quite suspicious about this, but is too excited by the possibility of Charlotte and Gary failing to return and being pursued and tortured through the sandy wilderness by a lunatic in big hat, similar to the screenplay of one of her favourite disturbing cinema treats, ‘Wolf Creek‘.

Is Cancun Chris really a mass killer? Was a high dose of hallucinogenic painkillers involved in Holly’s seduction of James? Will Vicky & Ricci ever stop bloody fighting? Does anyone out there even care?

The answer, sadly, is no to all of the above. But admit it. If any of those answers had been yes, you might have been more inclined to tune in, mightn’t you?

The Viewer warns you against it.

SERIOUSLY?: Geordie Shore: Everything Changes But You