Note how the cast’s reactions to the new boys’ genitalia offer a subtle hint as to the nature of their future relationships. Image via facebook.

The Viewer is. That’s why she watches this shite.

It’s hard to imagine a world without Jersey Shore. Once heralded as an exciting new nadir in television, it’s stars have partied, tanned, shagged and punched their way to global stardom and this, the sixth season, will be the last. How the

drunken adventures of eight East Coast Italian Americans captured the zeitgeist quite so effectively remains a question for cultural observers of the future to ponder, but the overwhelming numbers of people tuning in to see whether Sammi and Raw-nee are fighting or fornicating, Pauly D’s hair in a state of partial collapse or Deena faceplanting anything in her path convinced MTV executives that there was money in them thar spills, and they promptly commissioned an English version.

The fourth series proper of Geordie Shore began on Tuesday and it’s meteoric (if equally inexplicable) rise to global significance has ensured that the money once siphoned off into a account specifically to cover the US tanning tax is now being spent on posh new cameras, hairdos, t-shirt sponsorship and tickets to the MTV EMA’s in Frankfurt. The Viewer was frightened that all this investment would alter the essential dynamic of the show, but if Episode One is any indication, these people are impervious to the behavioral changes usually observed in closely monitored creatures and a few cosmetic improvements aside, things remained comfortably within her expectations. 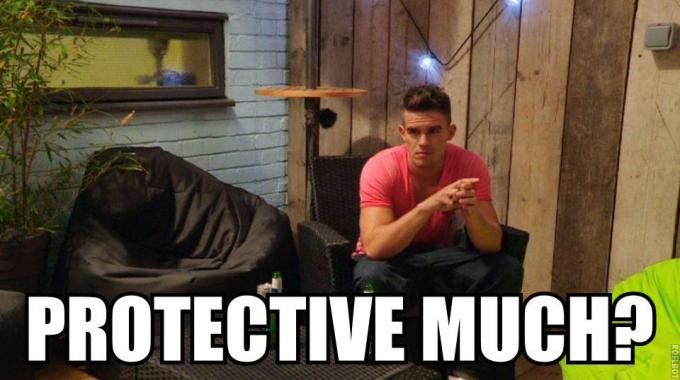 Poor soul. he has neither the intellect or the emotional maturity to untangle the complex threads of emotion tying him to Charlotte. Image via facebook.

A continuing denial of the bleedin’ obvious is the first signal that all is well at the Geordie Shore house. Charlotte-Letitia is still insisting she is not in love with Gary, but this time she has a boyfriend to prove it. What happens to this forlorn, obviously baffled creature after he wordlessly carries her overstuffed suitcases down the stairs of her parents house is not shared with The Viewer, but the impact of his existence upon Gary’s psyche is plain for all to see. Within a couple of hours of the welcome party kicking off, our the Parsnip warrior is punching a new cast member in the throat for having the temerity to not want to bang his on again, off again love.

Meanwhile, Holly is no longer in love with James (she is), James will definitely not be shagging Holly by accident again (he will) and Ricci and Vicki have an exciting new Range Rover. Jay and Rebecca, who were both released back into the community after Cancun, have been replaced by Dan & Scott. It’s a little early to say how these two are going to pan out, but since the former has already fallen out with the King of Shaggers and the latter had welcome camel sex with Holly in the toilet at the same party,  it’s safe to say their arrival is not going to knock this comet off it’s predicted course quite yet.

Let’s be honest, it could have been a damn sight worse. Image via facebook.

Like Charlotte, The Viewer suffers from the odd bout of incontinence. We wouldn’t want her to get too excited and wee at an inappropriate moment, would we?

The Viewer: Geordie Shore, Chaos In Cancun Pt.II – The Agony & The Ecstasy