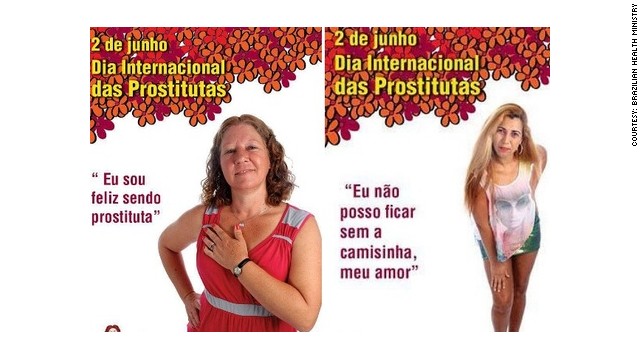 “I’m Happy Being A Prostitute.” & “I cannot go without a condom, my love.” Not ideal, but the message shouldn’t be lost. Image via christianpost.

A campaign encouraging prostitutes to protect themselves against sexually transmitted diseases has been withdrawn by the Brazilian Health Ministry after objections from religious groups, it has been reported.

Health Minister Alexandre Padhila claims that the posters, two of which are featured above, were released without his approval. He did, however, assure campaigners that “The problem is not the content, but the way in which it is presented” and that “the campaign will be maintained considering the vulnerabilities of stigmatized groups.”

One would hope so. In an ideal world, of course, prostitution wouldn’t exist, but while I respect the right of people to worship any god they damn well please, a stubborn belief in the inherent good of humanity has so far proved to be an insufficient deterrent to those who want to pay for pleasure. As long as there is demand for those services, (and make no mistake, with a major football tournament in the offing, demand is about to go through the roof) there will be a supply of people with no viable alternative willing to provide them, and several more willing to exploit the situation for financial gain.

“I’m Happy Being A Prostitute” is not a good start. But the Brazilian Health Ministry must have the courage of it’s convictions and push this initiative through. Apart from anything else, those who object on religious grounds could do with a gentle reminder that not everyone is privileged enough to have an opinion.

Honestly though? I won’t be holding my breath.