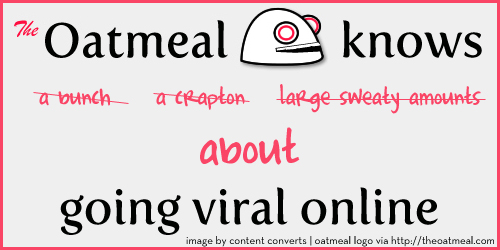 …and now, so does Jack Stuef. Image via contentconverts.

If you’re going to post a harsh critique of an individual with a significant web presence and following, you better make damn sure you get your facts straight.  If you don’t, and the target of your ire is sufficiently pissed off, you might find yourself on the receiving end of a public flaming that will leave your reputation (and your clothing) carrying the sharp smell of smoke for the duration of your career.

Even more so, it seems, when you’re calling out a guy who made a rape joke.

Buzzfeed contributing writer Jack Stuef will be ruminating on these complexities of web etiquette this morning, after his piece on Matthew Inman was brutally deconstructed by the cartoonist on his popular webcomic, The Oatmeal. Inman’s joke (one panel of a comic in which he claimed to have renamed the F5 button on his computer keyboard ‘‘the rape victim’‘ because of all the abuse it receives) had already prompted a huge response on social networking sites, with complainants either attacking the crassness of the cartoon, or defending Inman’s right to make the joke and publish it.

Steuf responded by claiming that Inman had grown too big for his webcomic boots, believing that he could publish anything and his army of fans would lap it up because they were so darn brainwashed. He then cited several examples of how Inman’s everyman public profile was a ruse and the real man was a liar and a cynical cad.

The problem was, several of those examples were false. Like the fact that Inman had kids. Or that he was a Republican. Matthew Inman’s response was to annotate Steuf’s piece with a red pen, pointing out the inaccuracies and the internet sources from whence they came.

Which was as embarrassing as it used to be in school.

Whatever your personal feelings on the subject, the fact remains that tolerance levels towards comedians, writers and/or cartoonists using rape jokes in their repertoire, are plummeting. Earlier this month, men’s magazine FHM learned that lesson the hard way, after publishing the line “it’s never acceptable to wear your girlfriend/mother/victim’s socks” in a fashion feature. The Twitter response was swift and damning, and the magazine forced to apologise.

Steuf obviously has a rudimentary grasp of how the internet works. He was apparently aware enough to know that an inflammatory piece on the author of a rape joke, if timed correctly, would give him (and his employers) a great deal of exposure. But while failing to observe the old “find two independent sources that aren’t wikipedia, or forget it” rule is common, if not standard, blogging practice, didn’t he figure that Inman would be close to breaking point by then, and perfectly primed to rip into anyone who gave him cause?

Obviously not. Meanwhile, Inman has now publicly acknowledged that his joke was “f**king stupid” and removed the offending panel. It’s unlikely to get the haterz off his back, but then, as an internet comic writer, he is no stranger to trolling and will invariably find some useful material in it.

And Steuf? Well, it’s safe to say his career in online journalism is on indefinite hiatus. Buzzfeed Editor-In-Chief Ben Smith has acknowledged that “The original article had a serious factual error, which we corrected fully and within an hour of its publication three days ago, and which we deeply regret.”  but stopped short of saying whether any further action will be taken.