Victoria’s Secret model Adriana Lima. Because images of female compliance do not always have to involve underwear… Image via fanpop.

My murky, cynical dungeon style office was lit by a flare of optimism last week, and it came from the most unexpected of sources.

Victoria’s Secret had reportedly thrown their weight behind a campaign highlighting a rising area of concern for many people – the issue of implied sexual consent – by offering alternatives to their range of underwear emblazoned with messages like ‘Sure Thing’ and ‘Unwrap Me‘. The new collection apparently included motifs like ‘Ask First’, ” and ‘No Means No’, and managed to do so in a witty manner that was not an immediate turn-off to all concerned.

I don’t wear Victoria’s Secret underwear, but their habit of throwing nubile young models down the world’s catwalks and high streets while draped in bits of lace and elastane have made their once niche product virtually ubiquitous, and therefore unavoidable. If they deemed this growing campaign worthy of their attention, the message would reach millions.

I blinked, then peered around my newly enlightened den of doom-mongery with wonder and awe. 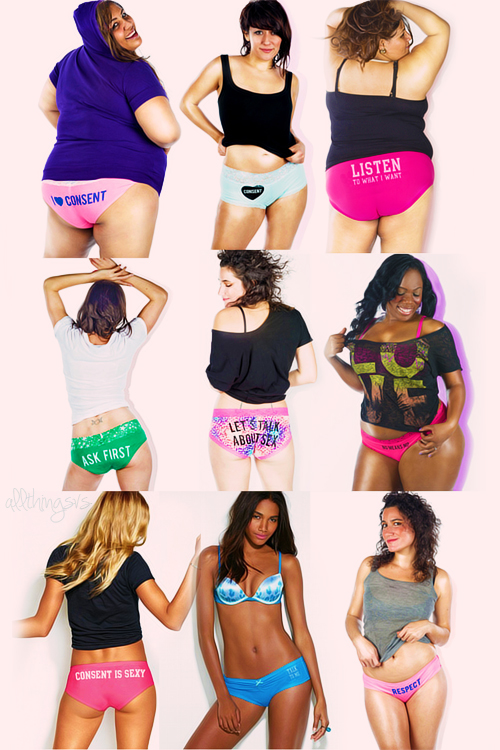 …and women in underwear are not always compliant. Image via tumblr.

Of course, it didn’t last. That optimistic, stuttering light was extinguished less than a week later, when the story spread that Victoria’s Secret were not responsible for the knicker revolution, and their ‘Pink Loves’ motif had been hijacked by a gang of nefarious feminists with a grudge.** ‘Pink Loves Consent’ was the work of FORCE: Upsetting Rape Culture, an activist collective working towards “a world where sex is empowering and pleasurable rather than coercive and violent“.

Which I hope most of us agree would be a nice experience for everyone.

Victoria’s Secret now find themselves having to adopt an opposing stance to a group promoting sexual consent. FORCE claim that VS lawyers contacted their website hosting company and requested that the site be taken down, on the basis that their customers were being confused. The hosting company obliged, and while FORCE’s campaign has received extensive coverage as a result, the natural order of female non-compliance being managed with strong arm tactics is reaffirmed.

Still, I found it to be a brief, yet  happy foray into a new, exciting world. And now I’m back in the dingy half light that nurtures my misanthropy, I don’t feel any the worse for the experience. Although a glimpse into the interior of this room did remind me… I must do some hoovering.